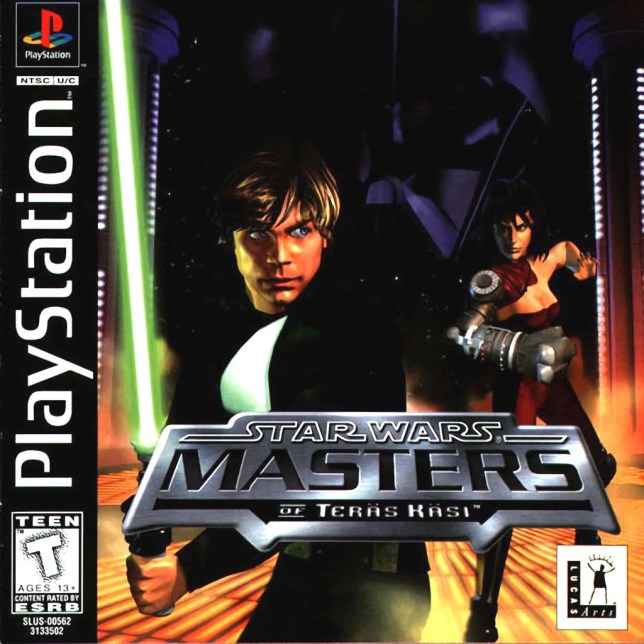 Worth another try? (pic: Lucasfilm Games)

Readers try to imagine a brand new fighting game featuring their favourite characters, from The Simpsons to Harry Potter.

The subject for this week’s Hot Topic was suggested by reader Watson, who asked if you could create a fighting game featuring existing characters from another game, film, TV show, or comic what would it be and how would it work?

There were plenty of imaginative suggestions, with superhero crossovers being especially popular, but most admitted they were unlikely to happen – if not for licensing reasons then because the chosen developer would never be involved.

Teräs Käsi strikes back
I know this didn’t go well the last time they tried it but I’d love to see a big budget Star Wars fighter. The problem with Masters Of Teräs Käsi is that it was really only based on the original trilogy and having Han Solo or Princess Leia fight Darth Vader just doesn’t make any sense. But now we have a lot more Star Wars content around there are more than enough skilled hand-to-hand fighters that you could make some really interesting match-ups.

You can have all the Jedi, like Luke, Obi-Wan, Ashoka, Ezra, and Rey. Then all the bad guys like Vader, Maul, Count Dooku, Kylo Ren, General Grievous, and Ventress. That’s already a good line-up, then just add in non-Force users that could still put up a fight, like Mando, Boba Fett, Bo-Katan, a Darktrooper, and maybe a few bounty hunters.

As for the story, who cares? (That’s certainly the attitude they took with Rise of Skywalker!) Just say it’s Rey using a hologram training program or something, job done.
Carnby

Super PlayStation Bros.
Personally, I’d love to see Sony give the PlayStation All-Stars Battle Royale concept (i.e. Smash Bros. knock-off) another go. Don’t literally make it a sequel, because the way the original worked, with only super moves counting as a score, was dumb but the basic concept of Smash Bros. but with PlayStation games would be great.

Sony have a lot more characters they could use now too, like Ellie, Aloy, whoever it is in Returnal, and the new Ratchet & Clank character. Throw in Bloodborne, that idiot biker guy from Days Gone, and maybe even Spidey and you could have a great game.

I’d imagine they don’t want to do it because they already failed once and they’d be embarrassed to do it again but them and Capcom are really the only companies that could do it. I mean, who would be in the Xbox one? Master Chief and some Gears Of War beefcakes, and… Ori?
Ansel

Wizard idea
Unless I’m forgetting one, or it was a mobile game or something, I don’t think they’ve eve really done anything with Harry Potter and wizards fighting with wands/magic. In the movies they’re like a cross between a cowboy showdown and a Jedi fight so there’s plenty to work with there, with all the different spells and different kinds of wands.

You’ve obviously got lots of different characters too, the only problem being that most of them look kind of similar in terms of costumes. That’s less of a problem with today’s graphics though, where it’s easier to show who everyone is, so I’d really like to see some kind of one-on-one wizarding duel simulator.

It couldn’t be a straight fighter but increase the distance between players and I can still see it working with fairly tradition controls.
JohnnyD

E-mail your comments to: [email protected]

All Marvel, all the time
I know everyone loves Marvel Vs. Capcom but if they do get the licence back I’d actually rather they go back and do the non-crossover games again. X-Men: Children Of The Atom and Marvel Super Heroes are two of my favourite 2D fighters and I’d much rather see a sequel to them than Street Fighter 6.

Apart from the modernisation of the graphics you can add a whole bunch of new characters and take advantage of all the gameplay gimmicks and extras they’ve been added into Street Fighter over the years. I’m kind of surprised Capcom never did it when they did have the licence but then Marvel can be very funny about that sort of thing, so who knows what sort of restrictions they were under.
Phobos

Joey Jo-Jo Junior Shabadoo vs. Bart
Someone mentioned bringing back The Simpsons beat ‘em-up recently but this Hot Topic made me think that a one-on-one fighter would make much more sense. What you need for a fighter is big, bold fighters that are instantly recognisable and have strong personalities. The Simpsons has that in spades, whether the characters are meant to be good at fighting or not.

Now I think of it I’m surprised this has never been attempted before, but all I can remember is that terrible wrestling game, which isn’t really the same thing. Obviously it’d be better if Capcom or Arc System Works did it but it’d have to be someone that understood the characters as well as just being good at making a fighter. Part of the magic of Smash Bros. is that Nintendo seems to understand third party characters better than the people that own them.
Guy Martin

Unfulfilled Fantasy
I guess this isn’t going to happen because Dissidia is already a thing, but Dissidia is rubbish so I’d like to see an actually decent Final Fantasy fighting game. A traditional one-on-one fighter where you can actually see the person you’re fighting and the graphics are good.

This is such an obvious idea to me I assume the reason it’s not happened is because Square Enix have something against it and have specifically told no-one to do it. I’m not sure what but I’d sure like to watch Cloud punch Tidus in the face.
Yolab

Do it yourself
This is a timely Hot Topic for me because about a month ago I downloaded Soulcalibur 6 and have spent a good chunk of time since then having great fun with the character creation section.

At first I stuck with copies of superheroes, and I don’t mind confessing to a certain amount of pride in my facsimiles of Blade, Dora Milaje, and Wonder Woman (less so my frankly rubbish version of Iron Man), before moving on to older, more literary characters such as Edmond Dantes, D’Artagnan, and Zorro, and then legendary historical figures such as Robin Hood (complete with Merry Men), King Arthur, and Sir Lancelot.

I’m pleased with my efforts so far, but as great as the creation tool is it’s obviously limited to existing move-sets from the pre-established, exclusively weapon-wielding roster and as such my cast never feels truly my own. Still, pitting Friar Tuck against World War Hulk hasn’t got old just yet.

But as for a dream line-up properly done, being a big fan of the Warren Ellis created comic book The Authority I’d love to see this group feature in a line-up somehow. Since they’re like a more brutal Justice League (think Justice Lords) they’d work well as DLC in a Mortal Kombat game.

I’ve had enough with Batman vs. Superman now (not that I wanted it in the first place…) what I really want to see is Apollo pitched against Midnighter.
Andrew Wright

E-mail your comments to: [email protected]

The small print
New Inbox updates appear every weekday morning, with special Hot Topic Inboxes at the weekend. Readers’ letters are used on merit and may be edited for length and content.

You can also submit your own 500 to 600-word Reader’s Feature at any time, which if used will be shown in the next available weekend slot.