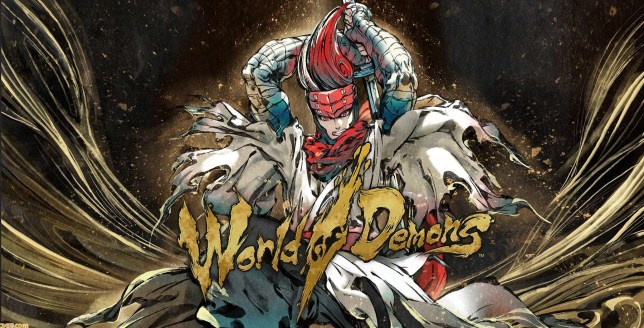 World Of Demons – Platinum do it again (pic: PlatinumGames)

PlatinumGames’ World Of Demons and Clap Hanz Golf, from the makers of Everybody’s Golf, headline a bumper month for smartphone games.

This month Apple Arcade celebrated its first anniversary with a huge flood of new games, including instant classics like Platinum’s perfectly orchestrated samurai actioner, World Of Demons, and the excellent Clap Hanz Golf. There’s still plenty for Android owners to get their teeth into though, the best of which is roguelike hybrid, Dungeon Of The Endless: Apogee.

Playing like a mix of WarioWare and pachinko, Pureya fires a new mini-game at you every 10 seconds, with your goal to collect as many marbles as possible in each level.

Using simple, if slightly twitchy, two-button controls, mini-games gradually escalate in speed and difficulty and are interspersed with pachinko levels that use the marbles you’ve collected to unlock collectibles, which in turn add new mini-games.

Playable in portrait or landscape and presented in chunky 8-bit pixel art, Pureya and its 30+ mini-games are both stylish and addictive.

Starting with a townhall and a small clutch of Vikings, your job in Northgard is to establish your village economy, balancing food production, commerce, and defence with the local geography and fauna.

The single-player campaign has voiced introductions to each level and individual goals that sit alongside the survival and resource juggling, each episode acting as a discrete puzzle with unique problems to solve and issues to overcome.

Polished, pacy and challenging, it works just as well on mobile as it did with mouse and keyboard. An Android version is due later this year.

Double-tap to see where you’re aiming, drag your shot into place, then swipe downwards to set your power, flicking back up to take the shot. It’s supremely satisfying and makes touchscreen control feel like an advantage rather than a hindrance.

With an addictive role-playing style meta game letting your team of golfers earn experience points to power up their various strengths, it’s a superb and highly playable addition to Apple Arcade’s line-up.

Crash Bandicoot: On The Run!

Beloved 90s icon Crash Bandicoot arrives on mobile in a free to download endless runner that recreates his usual brand of careering into the screen, collecting apples, and spinning through crates in pursuit of Dr Neo Cortex and his coterie of henchmen and women.

This time, along with standard runs you’ll also be fighting enemies and bosses, and collecting the currencies needed to forge weapons you have to use to take out each one.

There are countdown timers, bosses are oft-repeated re-skins with identical action, and Crash’s runs soon become repetitious, with progress gated behind either a tedious grind or microtransactions. Despite its colourful palette On the Run! is almost aggressively bland.

Dungeon Of The Endless: Apogee

Crash landing on an alien planet you start each run with two heroes, your task to work your way up through 20 levels and escape to the surface in this roguelike dungeon explorer-meets-Tower Defense.

On each floor, you need to manoeuvre an energy crystal from the entry room to an exit hidden somewhere on the level, while defending it and your crew from waves of incoming mobs.

Apogee comprises the base game and all five pieces of DLC, delivering a very significant payload of challenging and entertaining strategy gaming.

The latter give you a health or energy boost during fights, which rely on a rock-paper-scissors mechanic of punches, kicks, and throws. You can also play a training mini-game to win new cards, which later becomes mandatory to progress, forcing you to watch ads when you inevitably fail.

Its amusingly on-message alerts – ‘HEY NERD! You can’t build muscle just by texting! Get back to the dojo!’ – are great and being hazed, 80s style, by Johnny Lawrence remains inspiring. Sadly, the game, with its random-feeling successes and lacklustre card collecting, isn’t nearly as interesting.

Like Framed and its sequel, Fate Of Kai is a story told in comic strip form, where you have to change the outcome of each page. But instead of swapping frames around, you switch or remove action statements to, for example, make Kai jump instead of run or do nothing instead of fight.

Puzzles escalate in cleverness, soon adding nested sequences of actions and moments where you travel backwards in time to make a change that alters the present.

The trial and error needed to find your way out of the forest maze feels cheap, but the rest of the game is engaging and lightly thought provoking throughout. It may all be over in a couple of hours, but while it lasts it’s an involving and highly unusual adventure.

Japanese developer Platinum is well known for stylish action games, from critical darlings like Bayonetta and Metal Gear Rising: Revengeance, to the deeply peculiar The Wonderful 101.

Its first foray into mobile, World Of Demons, places you on a path populated by different breeds of demon. As well as using slash and dodge, your samurai hero can also capture vanquished foes’ souls, unleashing them as special moves and as solutions to environmental puzzles.

While there’s no exploration, your character effectively just walking from fight to fight down an endless corridor, the intricacy and subtlety of each combat encounter continues to deepen even after hours of play. It’s a masterclass in game design, working flawlessly on a touchscreen.