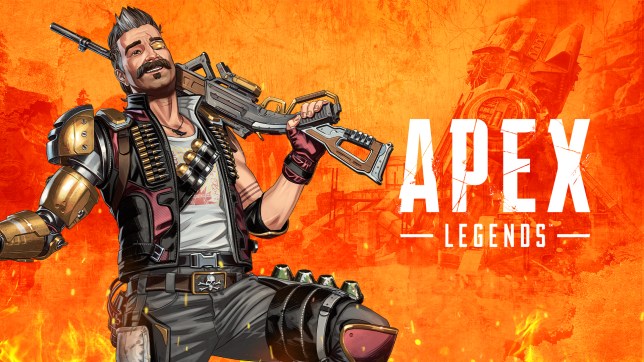 Season 8 of Apex Legends sees new character Fuze join the arena, for Switch players as well as everyone else (pic: EA)

Apex Legends has made its way to the Nintendo Switch but are the technical compromises worth the benefit of being able to play it anywhere?

Respawn’s Apex Legends has proven to be one of the few battle royales with serious staying power. Overshadowed only by Call Of Duty: Warzone and Fortnite, it remains one of the only long term successes in the genre. The Titanfall spin-off has even eclipsed its parent series in terms of mainstream popularity and has proven to be one of EA’s biggest non-sports success stories in recent years.

It recently flew past its second anniversary and is ready to invite a whole new audience into its arenas. After its success on PC, PlayStation 4 and Xbox One, the game has finally made the jump over to the Nintendo Switch. As with most ports on the platform though it’s clear that hasn’t be a simple process.

In terms of the Apex Legends experience, the entire game is there. This isn’t a port where content has been stripped back in any way. In terms of what the Nintendo Switch version offers, you’ll be getting the same live service experience as a high-end PC player. Although that doesn’t come without some serious cavaets.

All the legends (player characters), maps, and weapons are here. In terms of an overall package, especially considering the game is free-to-play, it’s impressive. Apex Legends has had a while now to find its groove, and expand on its initial launch, and Nintendo players are getting what is now a highly refined experience.

There are three maps in the game, all with very distinct personalities. Kings Canyon is the original map and is now iconic to the franchise. World’s Edge is an alien world slowly being ravaged by intense environmental dangers, from lava pits to snow-covered valleys. Olympus on the other hand is a technological marvel in the sky. Each has a vastly different personality and all are evolving, with story events and character takeovers of areas.

On top of that, eight legends have been added since launch, alongside a whole swathe of new weapons. If you’ve been away for a while, there is a ton to jump in and get acquainted with here. 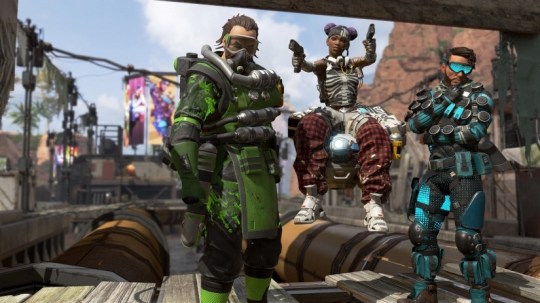 Two years on, Apex Legends is in an excellent spot (pic: EA)

Perhaps most importantly though, Apex Legends has continued to find its voice. Compared to other battle royales, the sheer pace that Apex forces is unmatched. The manoeuvrability of the legends allows them to rotate and steal space and that’s not even factoring in the specific abilities each character has. Be it utility, movement, scouting or combat-focus, each has a strong suit to create frenzied chaos on the battlefield. Controlling that is your key to success.

Apex Legends is defined by its ruthless aggression in a cotton candy coating. It’s colourful and its characters exude personality, as 60 players try to whittle the field down until only one team is left standing. It’s not quite as cartoony as Fortnite and doesn’t feature building, but nor is it as po-faced as Call Of Duty: Warzone. It’s a pitch-perfect middle ground that has forged its own identity in a crowded space.

All of that comes to the Nintendo Switch port of the game. It’s genuinely impressive to have the entire Apex Legends experience literally in your hands. With the number of events that come into the title, there is plenty to get your teeth into and it has cross-play too. Cross-progression isn’t in the game though, meaning you won’t be able to bring previous skins or unlocked legends with you from other platforms, but you will be able to play with your friends no matter what platform you’re playing on.

Sounds great, right? Well, here are where the port’s major issues begin to rear their head. You can play with your friends on PC, PlayStation, and Xbox ecosystems. However, it’s hard to recommend that experience. The Switch port of the game does not run in a state that is going to be competitive against any other version of the game. 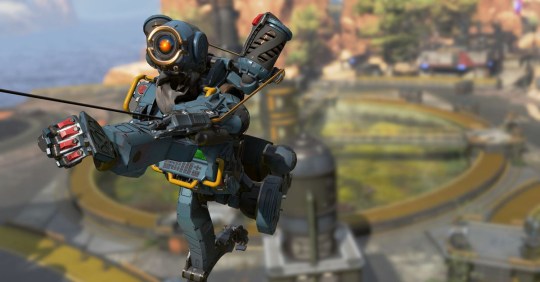 Pathfinder is one of Apex Legends’ most recognisable characters and he’s now made his way to the Nintendo Switch (pic: EA)

The Switch version runs at 720p resolution at 30fps when docked and 576p at 30fps in handheld. That’s at best, as frame rates can waver as the action gets more intense. While the fact it’s at all playable is impressive, in a game that is competitive by nature, these trade-offs sting. There is no single-player offering either so when the experience of actually playing the game is tarnished, it’s a huge knock.

The visuals are muddy and the choppy frame rate makes gunfights feel janky. Players who are anything but close to mid-range are exceptionally hard to hit, and it means certain long-range weapons feel unusable. It’s also not helped that there doesn’t seem to be a perfect way to play the game. On an HD quality screen, the game looks… well, it looks pretty bad. You will also need a Pro Controller to get the best out of the game.

Things look better in handheld mode on a smaller screen, but this comes with new complications. It ‘looks’ best when playing with Joy-Cons and the screen close to your face, but the act of playing with these controls is awful. You can, of course, use a Pro Controller in handheld mode, but your face is naturally further away from the screen, making it hard to make out enemies even at mid-range.

It just feels, no matter which way you play the game, that you’re sacrificing some element that will really hurt your play one way or another. You’ll likely have to experiment and find your perfect trade-off. But it will be a trade-off and feels like you’re not performing your best because the tech is not conducive to a proper competitive experience.

There is an option that we’d highly recommend taking advantage of though. In the settings, you can opt-out of cross-play. Do this. Frankly, players on Switch are at a huge disadvantage compared to other consoles, due to the drastically worse resolution and frame rate. In a first person shooter, especially, players on Switch will have to work twice as hard as their compatriots on other consoles. Do note, however, matchmaking will take longer as the game tries to fill maps with 60 players of similar levels from a smaller player base. 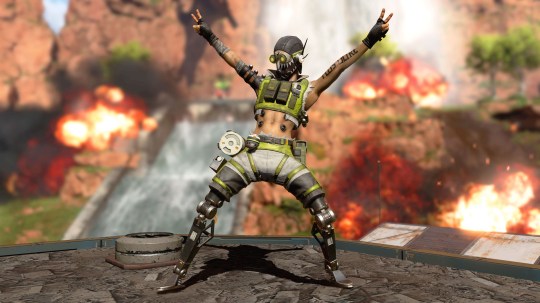 Apex Legends on the Nintendo Switch is a complicated bag. On the one hand, it’s an impressive feat. It is the complete Apex Legends package. For free, it is a massive experience and you can get lost for hundreds of hours, never paying a dime unless they want to get into the Battle Pass and skins. Being able to play cross-play with friends is also a huge bonus.

However, that novelty only stretches so far. For a game that encourages competitive, fast-paced action the performance just isn’t there. The subpar resolution and frame rate hamper the experience too much and there is no clear ‘best way to play’. No matter what, players are going to feel they are fighting the limitations of the hardware in some capacity.

Apex Legends is another in a line of Nintendo Switch ports that remain impressive in the fact that they exist, but ultimately are too compromised to entirely recommend. In a multiplayer first person shooter, especially one as ferocious as this, that problem is especially evident.

However, ultimately, it’s a massive free-to-play experience and all you have to lose is time and a little storage space. If you’ve been looking for a great multiplayer shooter on the Nintendo Switch this is a clear contender on the platform. It’s just a shame that it’s drenched in the aura of compromise.

In Short: It’s amazing it runs on the hardware at all, but the performance is a huge compromise, especially in a solely competitive environment.

Pros: A full-featured version of Apex Legends in the palm of your hands. Full parity with other versions when it comes to features, including cross-play and access to events and content as they drop.

Cons: The resolution and performance hits are extensive. In a multiplayer first person shooter, those compromises are deeply felt.