FINALLY, the world’s most expensive gatecrashers have made it to the swankiest party in club football.

Manchester City – the club with a long and mutual loathing of Uefa – have made it to a Champions League final at the tenth time of asking. 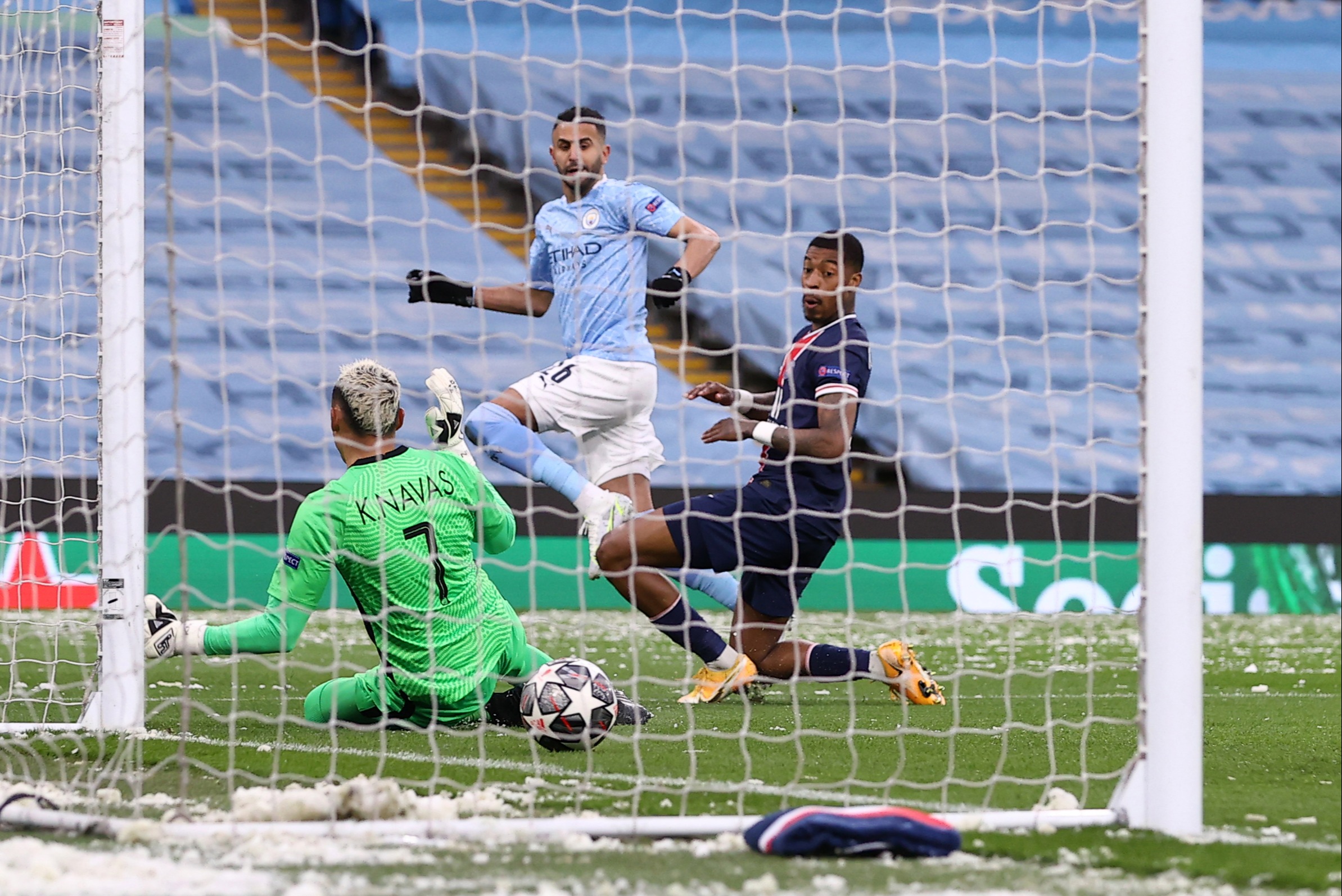 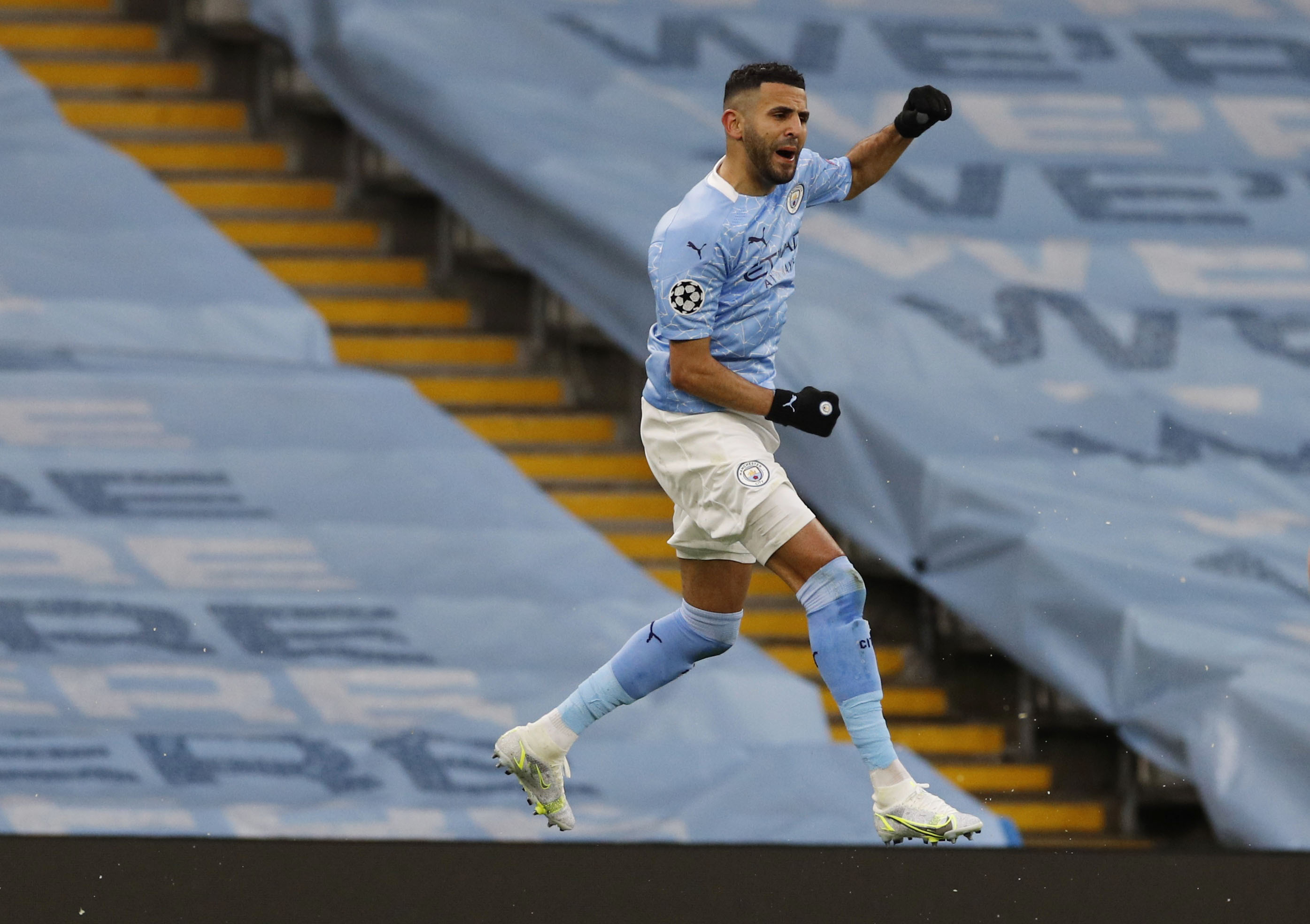 Mahrez wheeled away in delight after scoring in back-to-back games against Paris Saint-GermainCredit: Reuters

With summer fast approaching in Manchester, Pep Guardiola battled through the hail, the snow and the piddling rain to book a date with Chelsea or Real Madrid.

A fifth Premier League title can be sealed on Saturday, but this is what Guardiola was brought here to do.

Riyad Mahrez struck twice on the night, three times in the tie, after another long-range master-pass from keeper Ederson and a brilliant assist from the magnificent Phil Foden.

But on a night of a chaotic night of zipwire football, from two oil-rich sides intent on showcasing their talents whatever the elements, this semi-final triumph was largely about City’s defensive quality.

When John Stones embraced Oleksandr Zinchenko, after the blocking of a Neymar shot was celebrated like a goal, it encapsulated the tie better than any other moment.

Stones and Ruben Dias blocked and cleared and tackled and headed until their bones were bruised – but to talk merely of bravery and heroism would do them an injustice.

It takes immense skill to defend as well as those two did and have done for much of a season which is promising a glorious treble.

City were supposed to be banned from this season’s competition for financial wrongdoing – only for their expensive lawyers to spare them on appeal.

A beautifully crafted counter-attacking move, and the Algerian winger is at the back post to clean up for his second goal of the night!

Man City are so close to Istanbul! 🙏 pic.twitter.com/8SRlUmCfBp 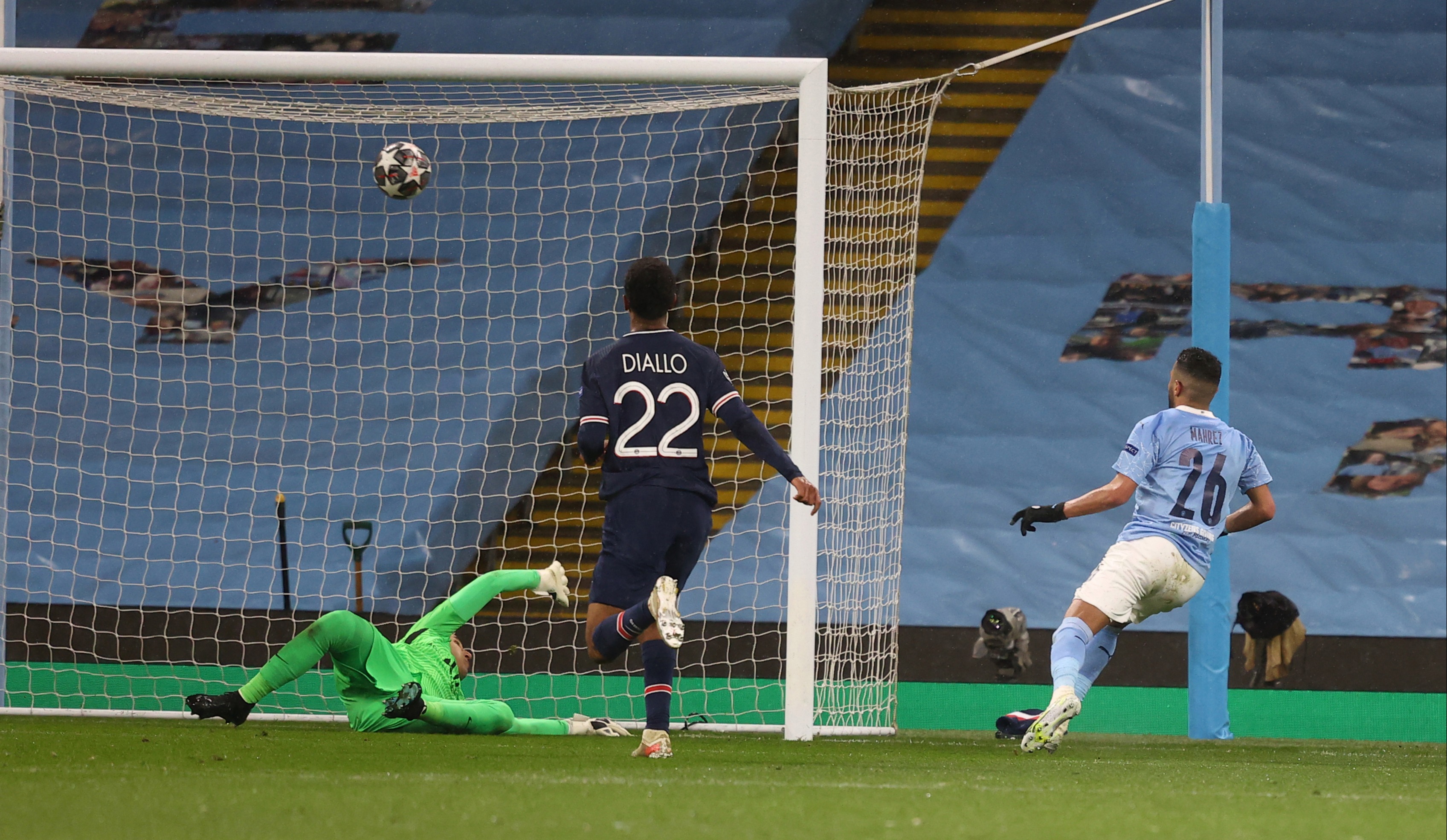 Mahrez found the back of the net in the 63rd minute after being picked out by Phil FodenCredit: The Sun 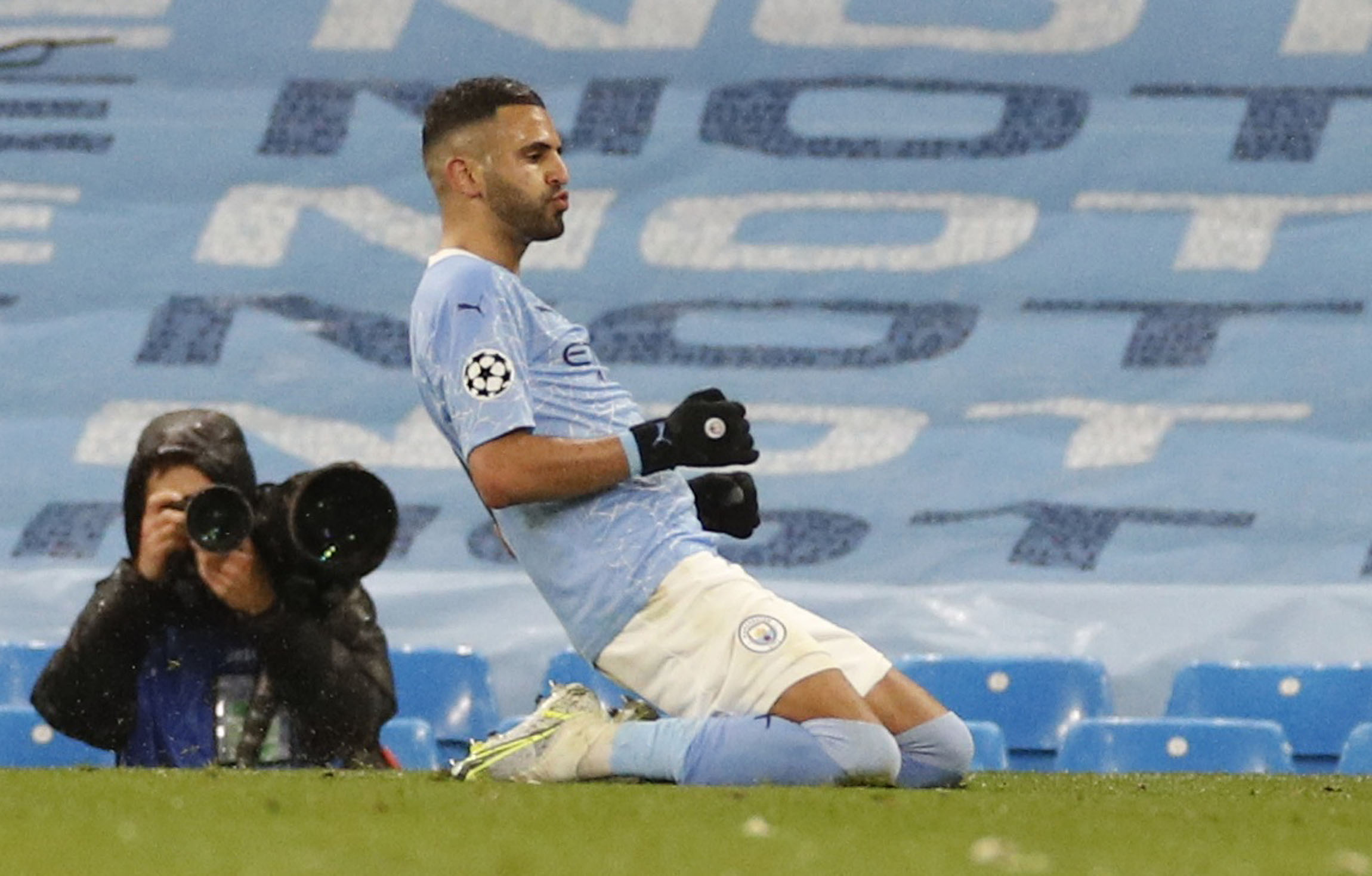 It was another stunning performance from Mahrez who stole the showCredit: Reuters

And they made a brief, panicked attempt to break away from Uefa in the failed European Super League.

Their supporters, when they were allowed in, had booed the Champions League anthem for years.

But finally now they may learn to love the competition – and be persuaded to go out and buy a job-lot of Gazprom.

For Guardiola, this will be a first Champions League final appearance in a decade, since his Barcelona reached its peak by playing Manchester United off the Wembley turf.

He has failed personally in this competition over the previous four years and is sick to the back teeth of those accusations of over-thinking team selections and trying to be too clever by half.

There was none of that over two legs against Paris – just a well-balanced team proving its defensive mettle as well as its more obvious attacking verve.

PSG were handed a traditional Mancunian welcome – a torrential hailstorm – and they were still shovelling white stuff off the pitch as the sides lined up, former United men Angel Di Maria and Ander Herrera doubtless feeling nostalgia for the inclement climate.

There was an element of chaos as both sides tried to get used to the surface – Foden and Fernandinho both guilty of wild early challenges and PSG settling the sooner. 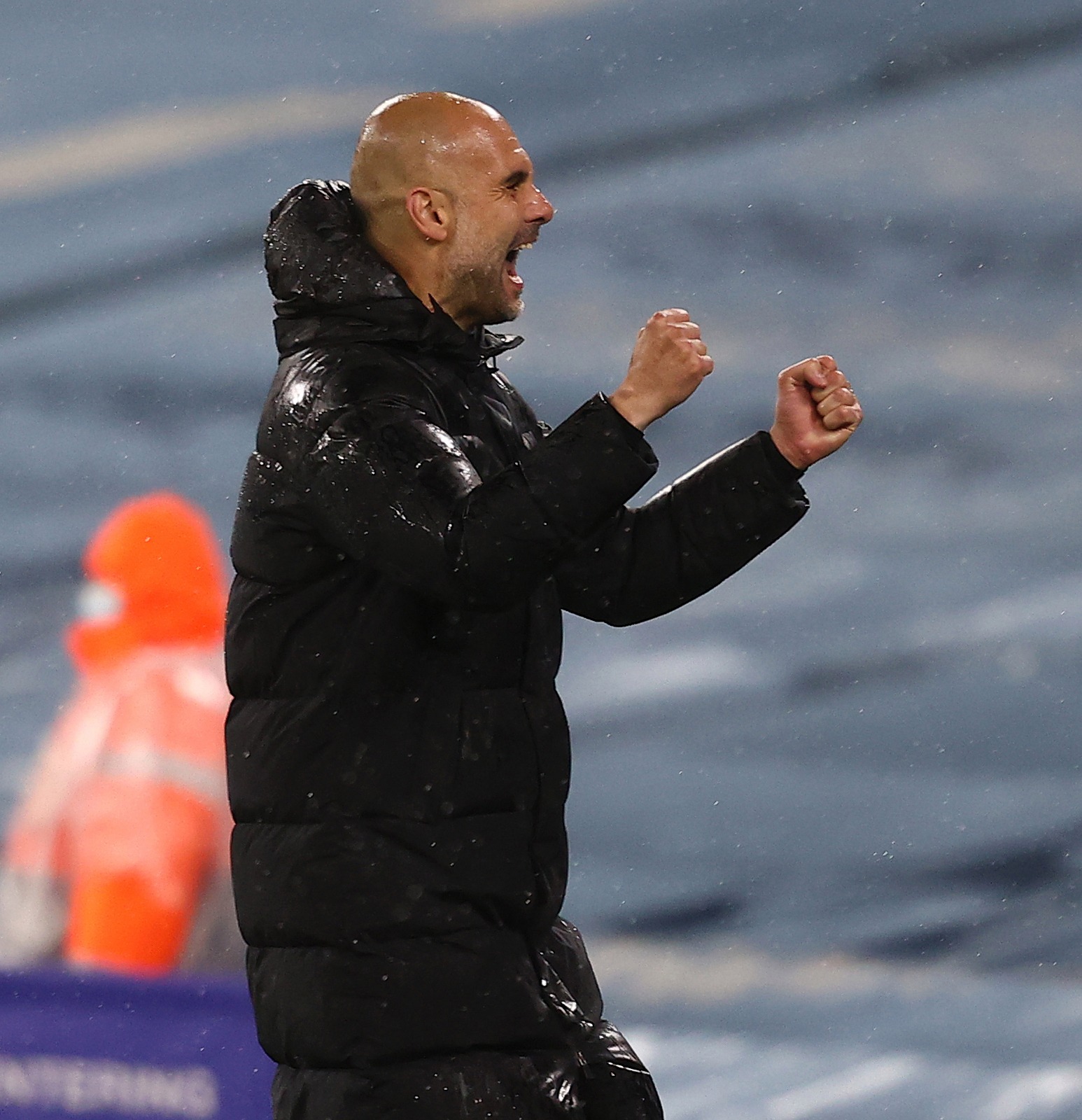 Pep Guardiola has reached his first Champions League final since 2011Credit: The Sun 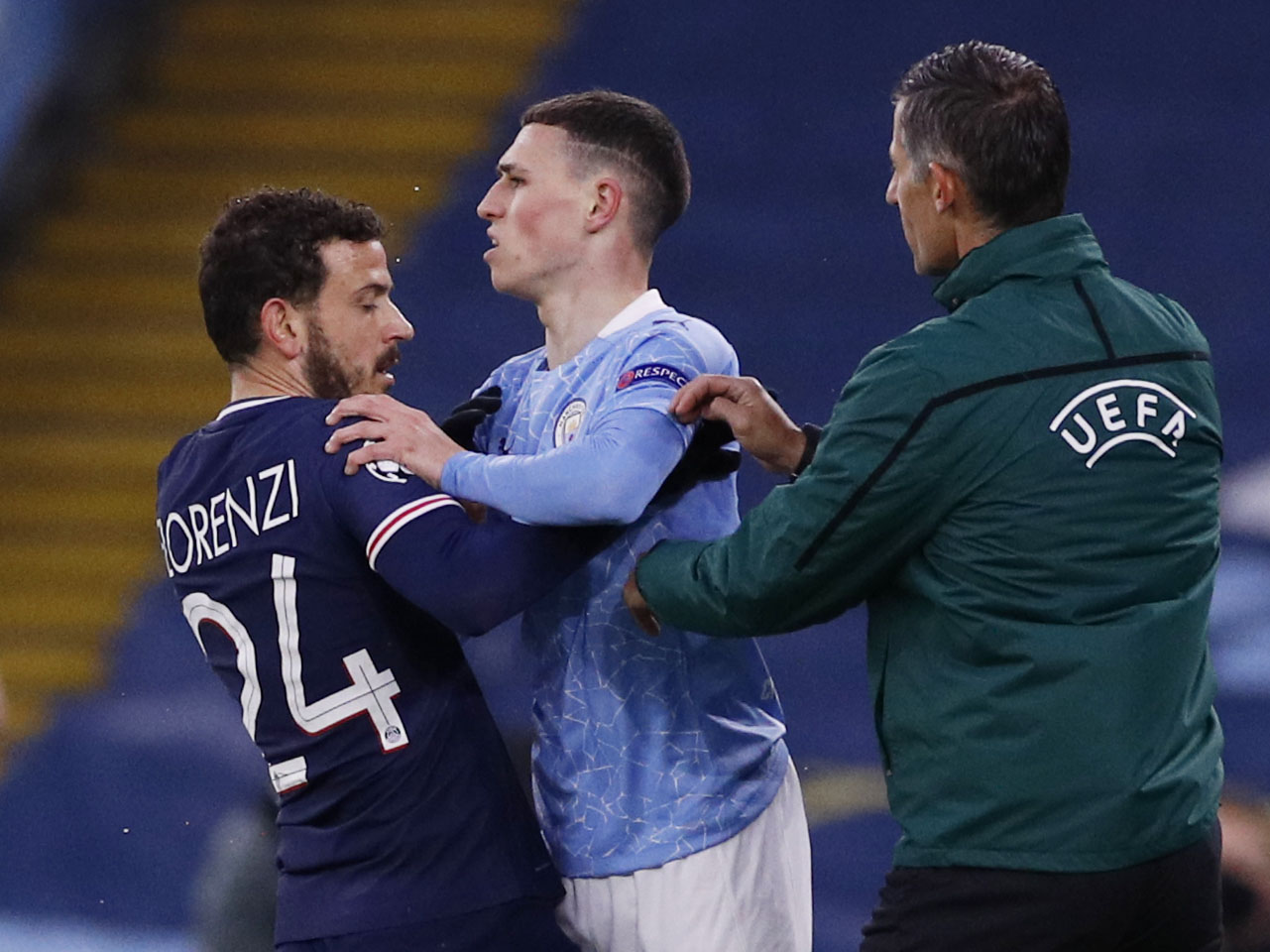 Tempers flared between Phil Foden and Alessandro Florenzi in the first halfCredit: Reuters 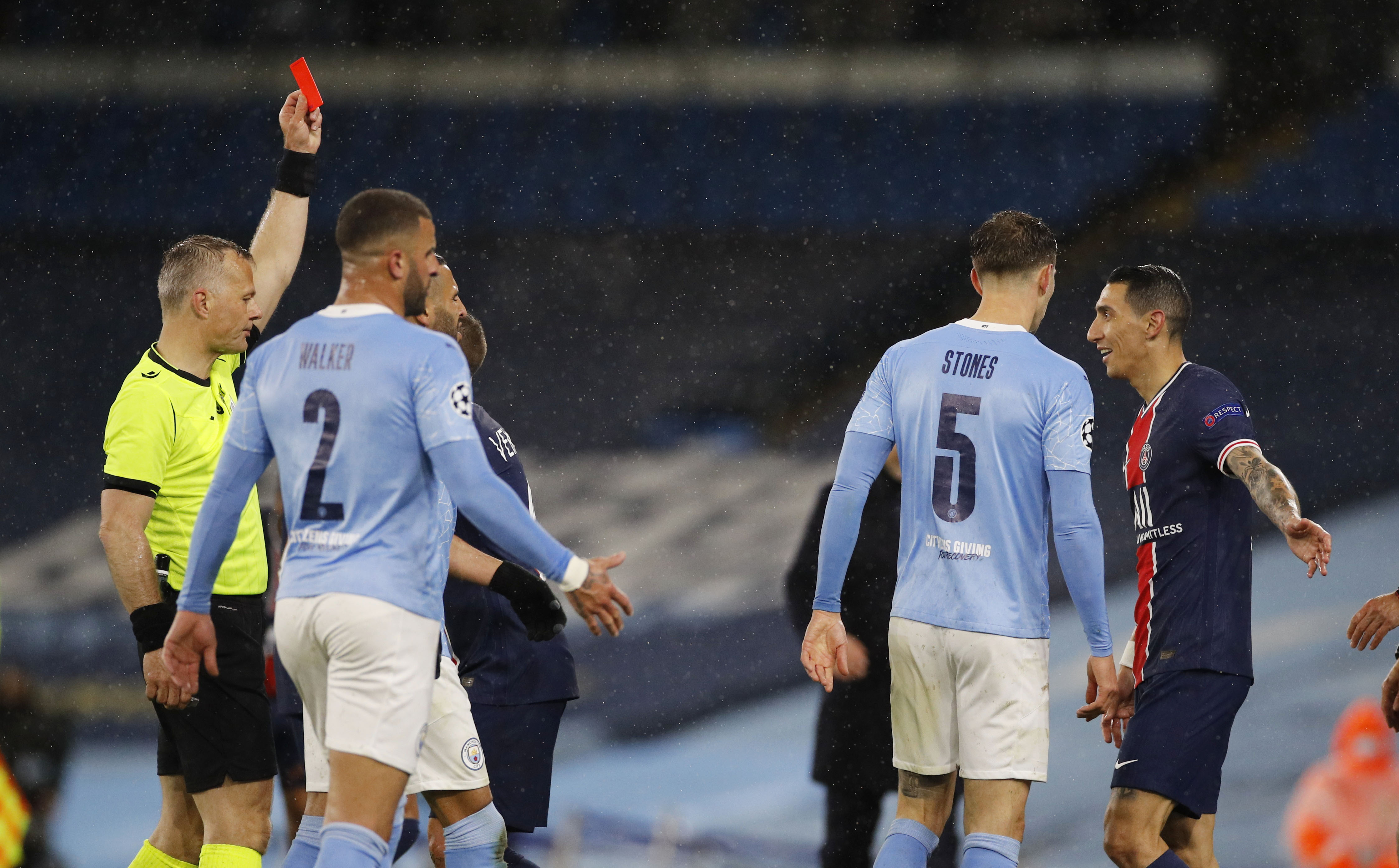 Angel Di Maria was sent off in the 69th minute after kicking out at FernandinhoCredit: Reuters

And then ref Bjorn Kuipers, perhaps persuaded by a rowdy PSG contingent in the stands, awarded a penalty for handball against Zinchenko.

Yet City’s left-back had clearly only been struck on the shoulder, so Kuipers consulted his monitor and did the decent thing.

Then a moment of majesty from Ederson, a keeper who can ping a long crossfield pass like few outfield players.

This one was a classic – low trajectory, over 60 yards, on to the toe of Zinchenko who cut back for Kevin De Bruyne.

The Belgian’s shot was blocked into the path of Mehrez who angled home a shot – and City were two up on aggregate just when they had feared being pegged back to level terms.

This may not have been quite as chaotic as the last time Pochettino brought a team here for a Champions League clash – when Tottenham won an extraordinary quarter-final tie on away goals two years ago.

But there was a glorious mix of high quality passing and weather-assisted blunders.

Neymar was frequently zigzagging through the snow like an alpine skier and Marquinhos headed against the bar when Ederson was caught flapping. 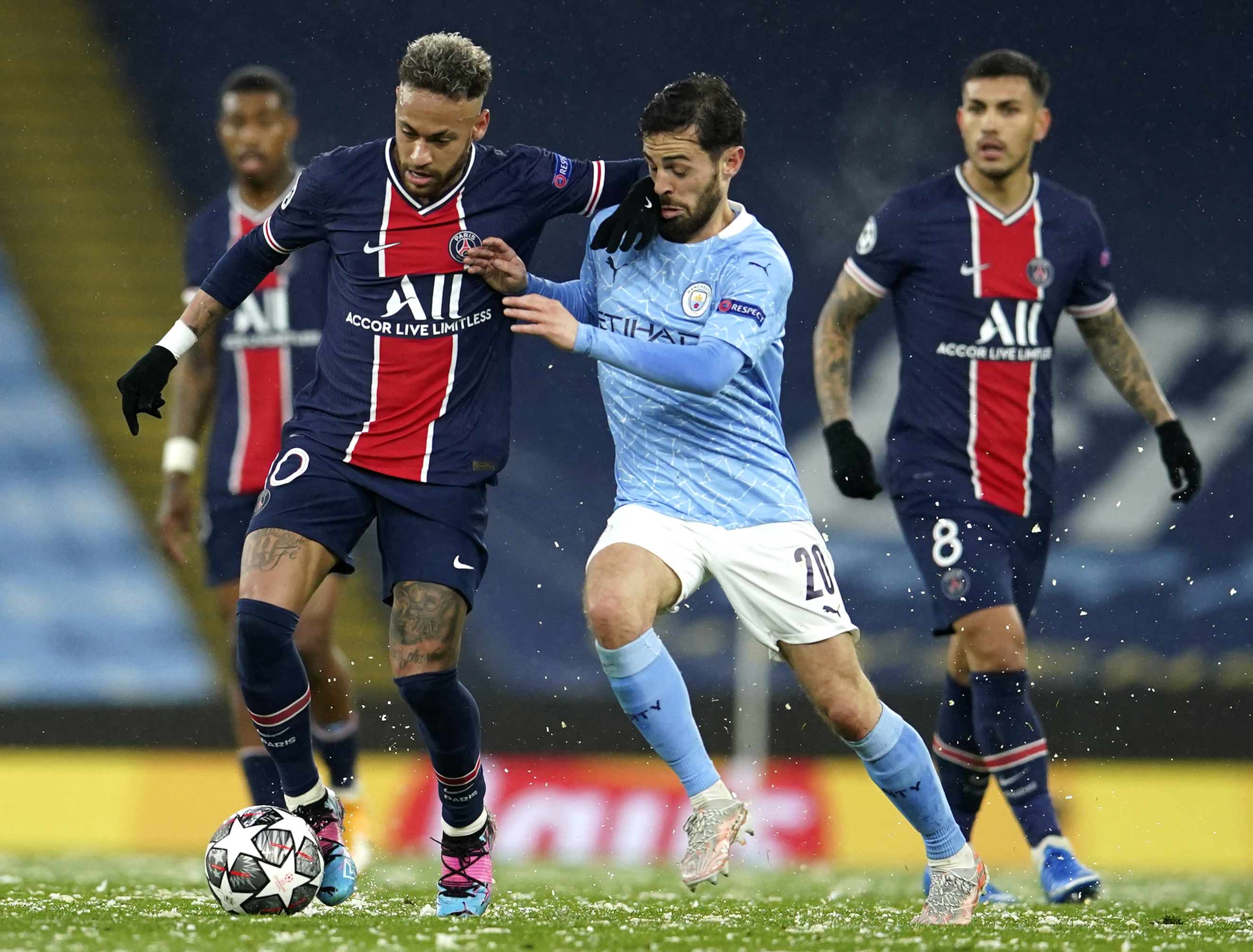 Pep Guardiola’s side will be competing in their first-ever Champions League finalCredit: AP 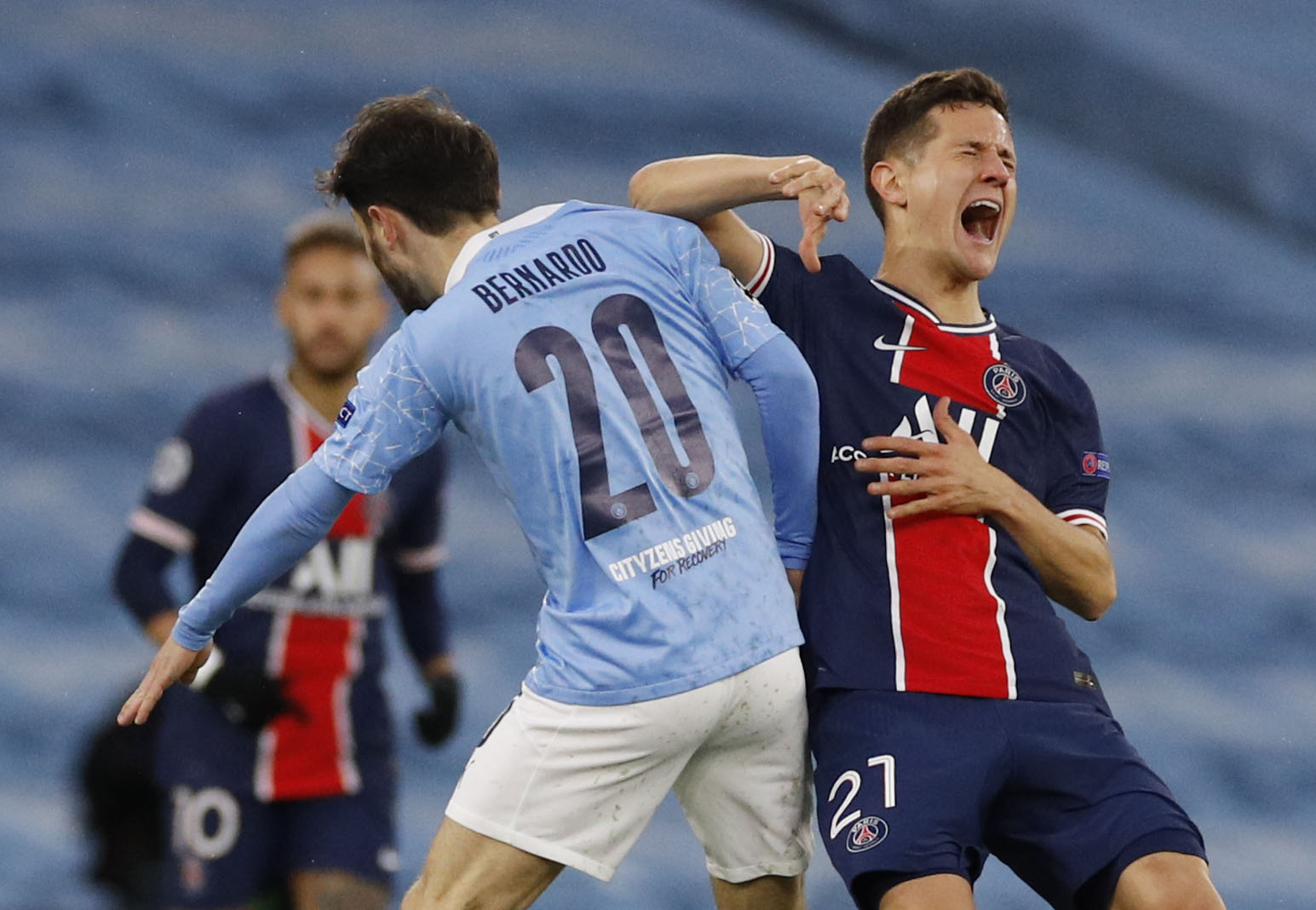 PSG were second best as City proved to be far too good for the Ligue 1 giantsCredit: Reuters

Then Ederson rolled one out to Gundogan, who was robbed by Di Maria – the Argentinian shooting into the side netting with the keeper off his line.

Herrera, who had just been booked for a skirmish after he’d feigned injury with an outrageous shriek, drilled a shot against the stanchion.

Paris were making most of the running but John Stones and Ruben Dias were putting heads and bodies on the line and Foden got his bandy legs whirring, threatening to scuttle through the entire visiting defence.

At half-time they cleared the surface, taking the jeopardy out of City’s passing game.

Foden had a shot pushed out by Keylor Navas then Neymar went on a long diagonal scamper and finally had an effort blocked by Zinchenko, who was embraced by Stones as if he had just scored.

There was a frenetic urgency about Paris and a heroic bloody-mindedness about City’s defending – Dias absorbing shots like a human punchbag, Stones leaping to clear like a can-can dancer.

Then the breakaway clincher, De Bruyne locating Foden, who wrapped his foot around the ball for a first-time square pass which Mahrez met with a surgical back-stick finish. 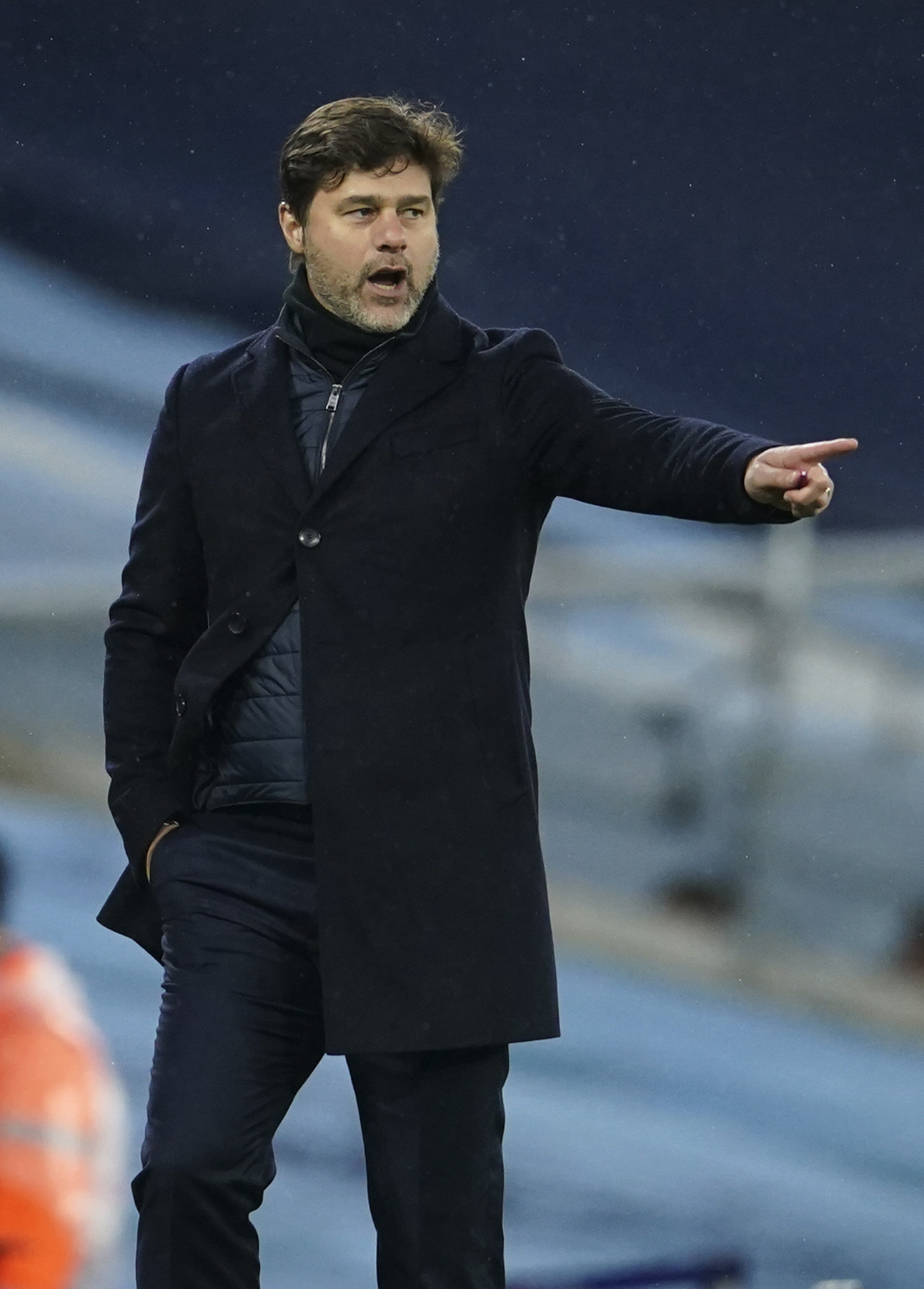 PSG had been threatening to lose their heads all evening and that was their cue to do so.

Di Maria stamped on Fernandinho as the ball went out for a throw-in and Kuipers did not hesitate to show him the scarlet.

Foden and Mahrez might have added to the tally against ten men – but City had weathered all sorts of storms to earn their prize.