IT’S taken over two decades, but at long, long last they can party like it’s 1999.

Maybe not in the streets or the pubs in the blue half of the city…but behind every set of curtains in an Everton household you could hear the fizz of beer cans opening last night. 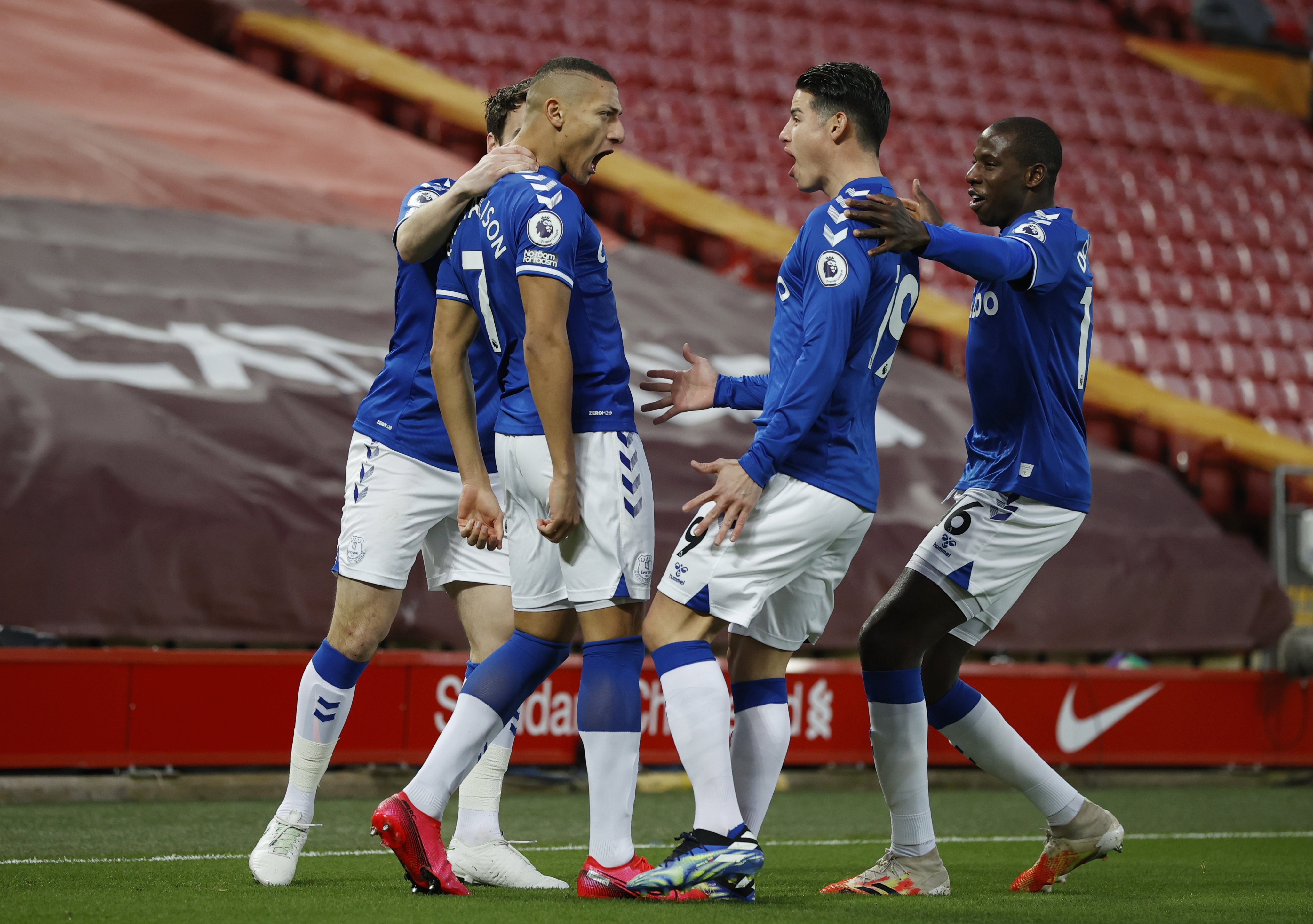 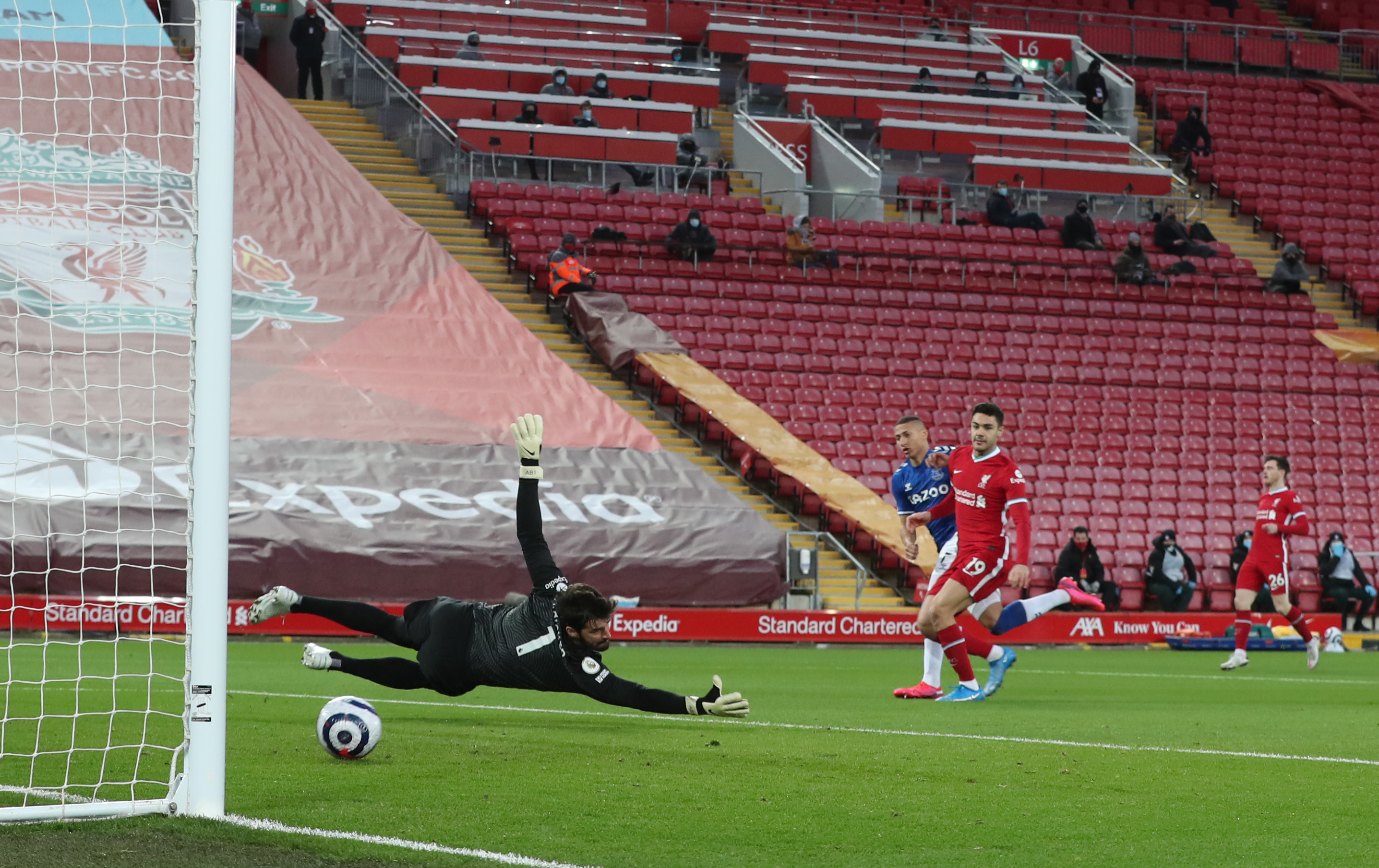 It was a composed finish from Everton’s Brazilian attackerCredit: Times Newspapers Ltd

And not, for once, in commiseration. This time in celebration of a first victory at Anfield in 22 years.

Richarlison’s quickfire strike and Gylfi Sigurdsson’s late, late penalty – which predictably had Reds raging – had them singing the Blues at Goodison, and cursing them at Anfield.

A victory made all the sweeter as it hammered another nail in the coffin of their bitter rival’s already on-its knees title defence.

And one which gave a Liverpool side a share of a couple of records no-one in their right mind would have even dared suggest a couple of months ago.

A fourth successive home league defeat for only the second time in their history, dating the way back to the 1923.

One which also saw them join – irony of ironies – Everton five years later as the only reigning top flight champs to lose that many in succession on their own patch.

And just to rub salt in the wounds, they added another name to the injury list as well. No prizes for guessing it was a centre-back, either, this time Jordan Henderson.

More of that later. First, though, that lightning strike inside three minutes which set you thinking that a bad season was about to turn into an absolute nightmare for Klopp and Co.

The fact it came from the right boot of the man who has almost become the forgotten villain from the infamous first meeting in October was as comical as it was ironic. 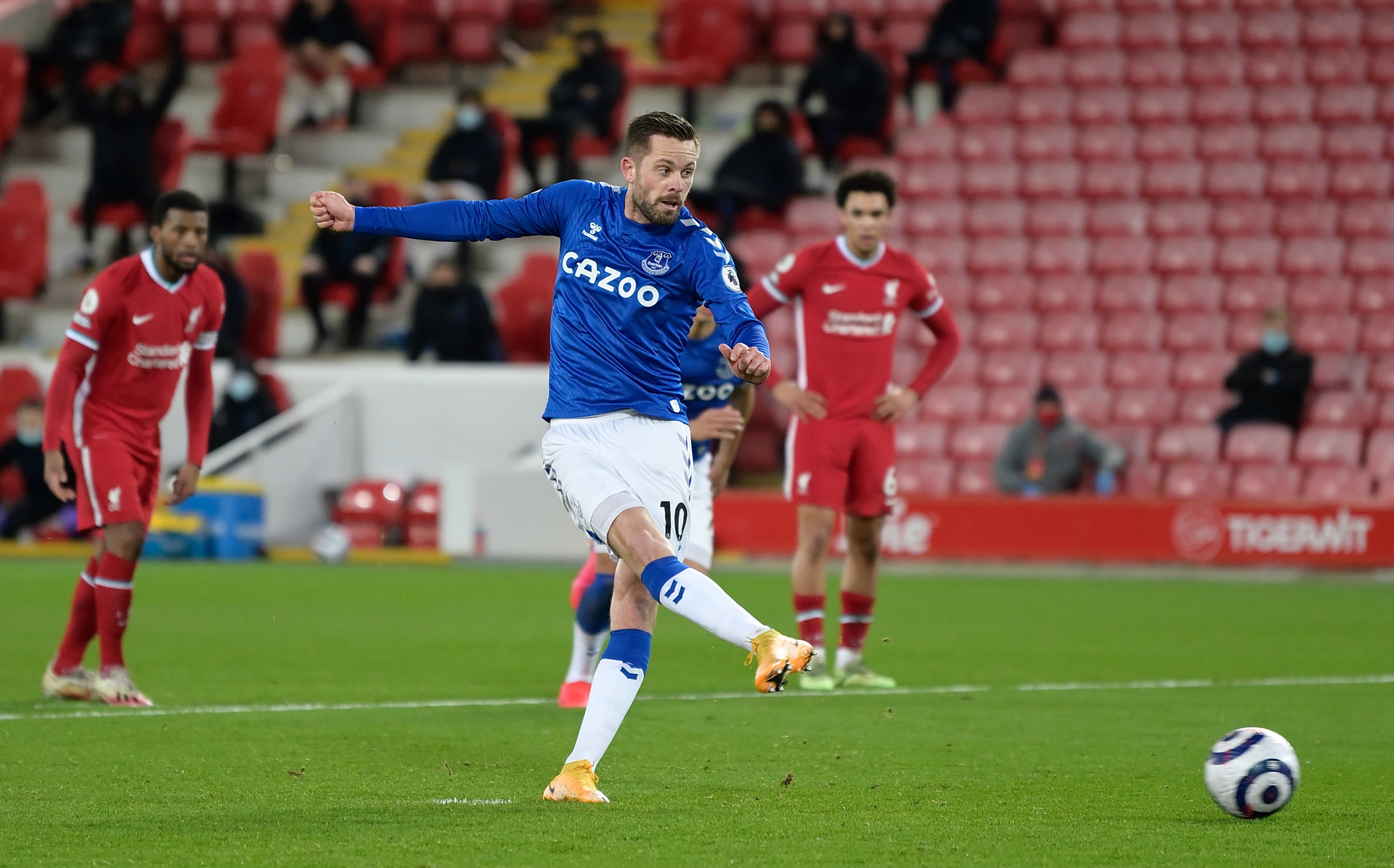 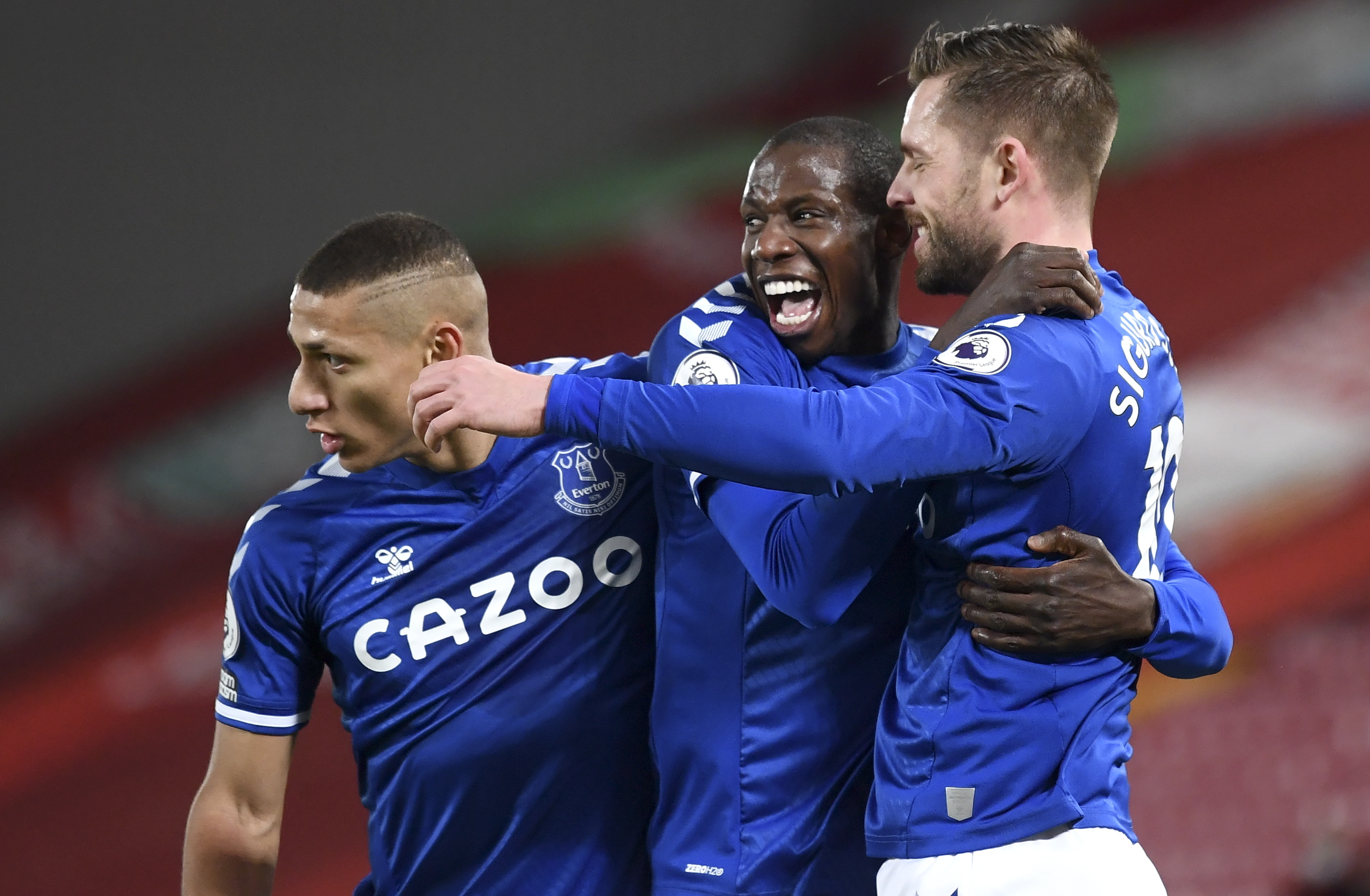 Everton’s players knew they were home and hosedCredit: EPA

All the vitriol, all the venom from that 2-2 game was aimed at Jordan Pickford, for the challenge which ended Virgil van Dijk’s season. You may have heard something about it.

Yet Richarlison, too, was in the dock that day, handed a straight red for an industrial flooring of Thiago. Well it didn’t take long before they were slating him again here.

James Rodriguez, as so often, was the provider with a delightful ball for Richarlison, and – with the hapless Ozan Kabak lumbering in his wake – he drilled into the corner.

The Turkish centre back had joined Liverpool on loan on deadline day, after a recommendation from his Schalke boss David Wagner, Klopp’s big pal.

With friends like that, eh, Jurgen? In those first chaotic opening minutes even van Dijk on one leg would have made a better fist of it.

As it was the closest the Dutchman got to helping out was a seat in the stand. And yes, you could argue it was a needless journey that broke regulations given he couldn’t play a part.

Liverpool, though, had more to worry about. Never mind the ferocious wind making any sort of controlled football nigh on impossible – Everton were threatening to blow them away.

They could well have done even before the break, in fact, if it hadn’t been for a Seamus Coleman chance which he did well to reach – and woefully to execute.

By then Liverpool had suffered another mighty body blow in losing skipper Henderson, who limped off with a pulled groin. 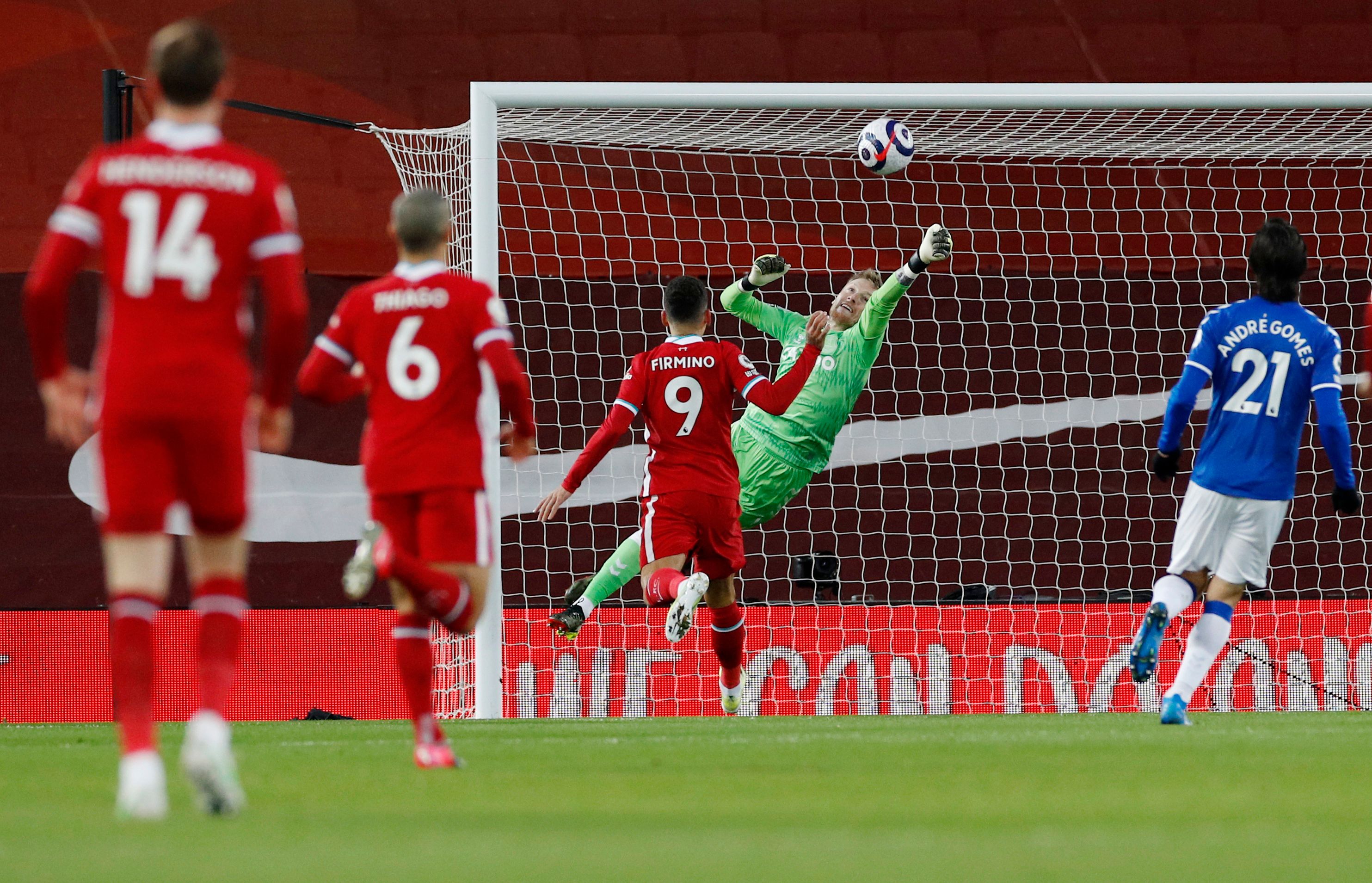 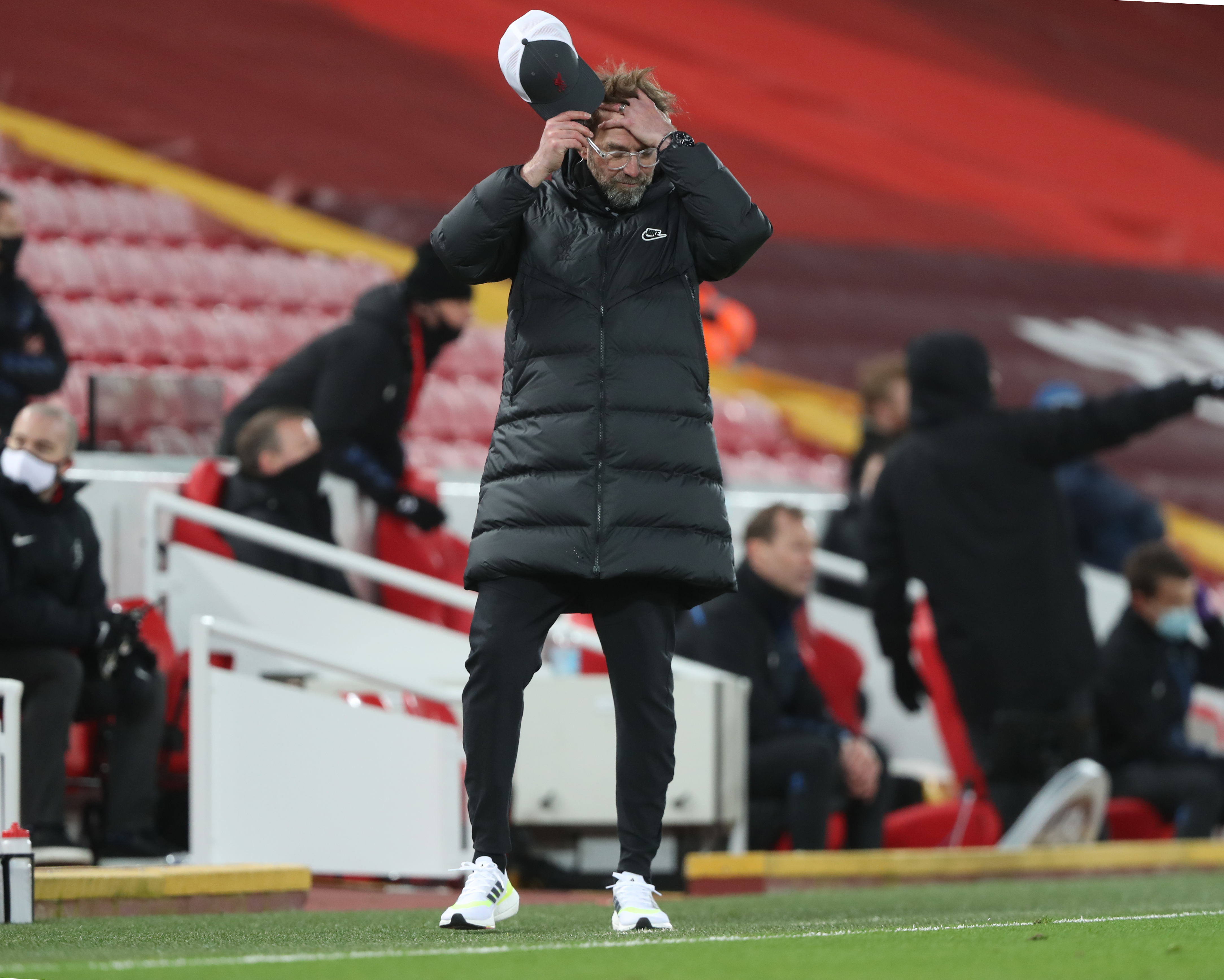 Another week, another centre back on the casualty list. And with every passing minute, edging towards yet another defeat as well.

Rookie replacement Nat Phillips was still getting his bearings when Lucas Digne curled over a magical ball, and Seamus Coleman launched himself to make contact.

Initially it seemed a superb point blank block from Alisson. Yet the header was straight at the keeper and Coleman’s reaction spoke volumes about what an opportunity he’d blown.

And when Liverpool flew at them in the second half – clearly a case of play to our strengths because we’re awful at the back – you just sensed it was a miss Everton would regret. 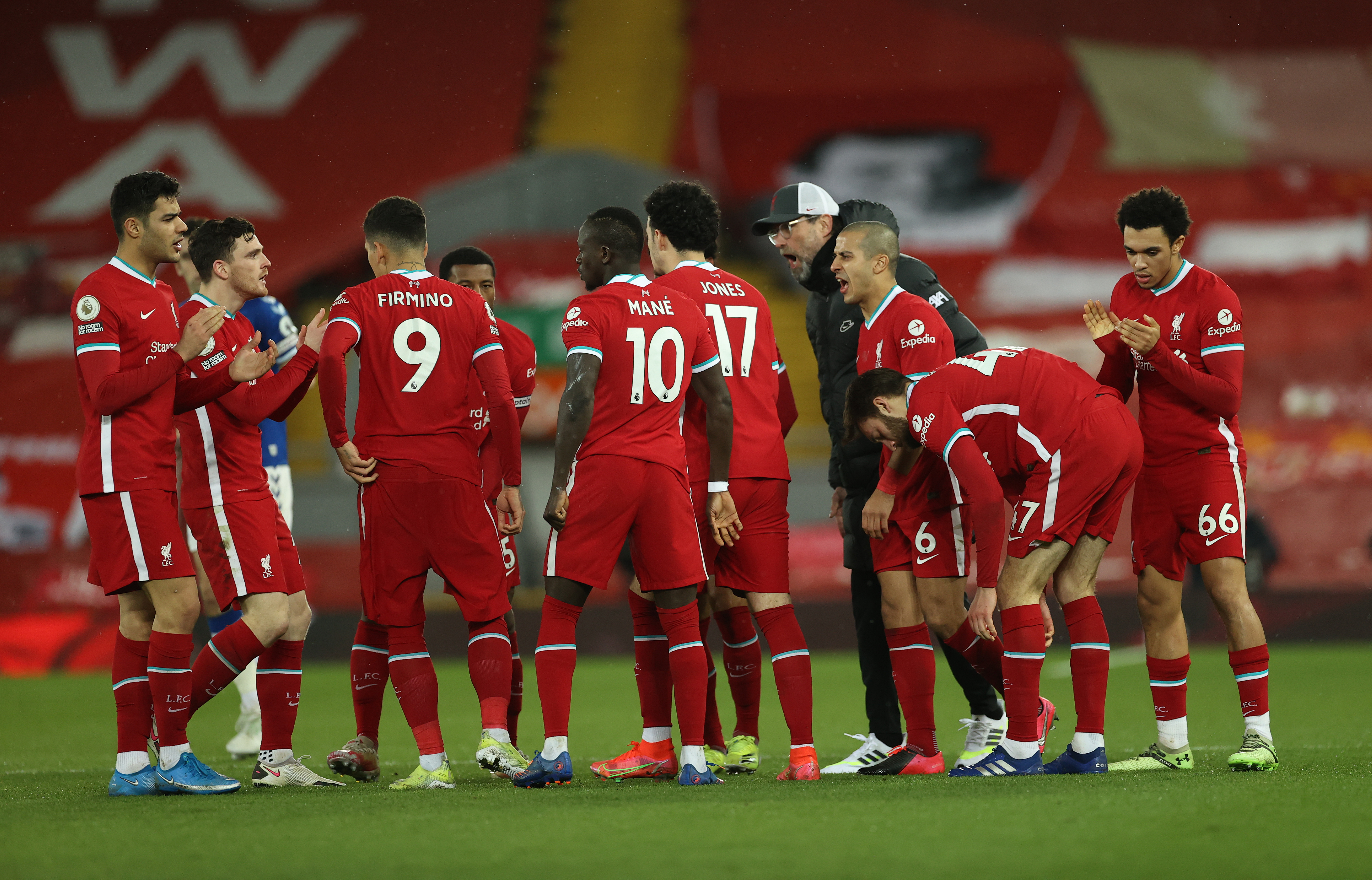 Liverpool were well off it as Everton claimed the derby spoilsCredit: Eddie Keogh Telegraph Media Group

After all, they hadn’t beaten their rivals since 2010. The Reds hadn’t lost to them in 23 games, their longest run against any opponent.

Everton just don’t win this fixture. Liverpool were intent on proving it, and only a last-ditch tackle as good as you’ll see from Michael Keane stopped Sadio Mane from levelling it.

But a couple of decent Pickford stops and the longer it went, the thought crept back. Maybe, just maybe. And eight minutes from the end we knew.

Tom Davies was on the edge of his own box when he sent Richarlison chasing away, and he slid it across to the galloping Dominic Calvert-Lewin, fresh from entering off the bench.

Alisson blocked his low shot, but as he went for the rebound, the Everton striker tumbled over Trent Alexander-Arnold, still prone from sliding back to challenge.

It was unintentional and it needed a VAR check on the sideline from ref Chris Kavanagh – but he stuck with his initial decision.

So then it was how’s your nerve Gylfi Sigurdsson, another to have come on deep into the second half.

Fortunately for Blue noses it was ice cool, as he slid it slowly and clinically into the bottom corner.

Then, and only then, did Everton truly believe. It was won, the derby was theirs…let’s hope they haven’t forgotten how to celebrate it.