THE FOOTBALLING gods are playing with Leicester’s Champions League dreams once more.

Before tonight’s trip to St Mary’s, just three wins were needed for Leicester to clinch their seat at the table of the European elite – banishing the painful memories of last season. 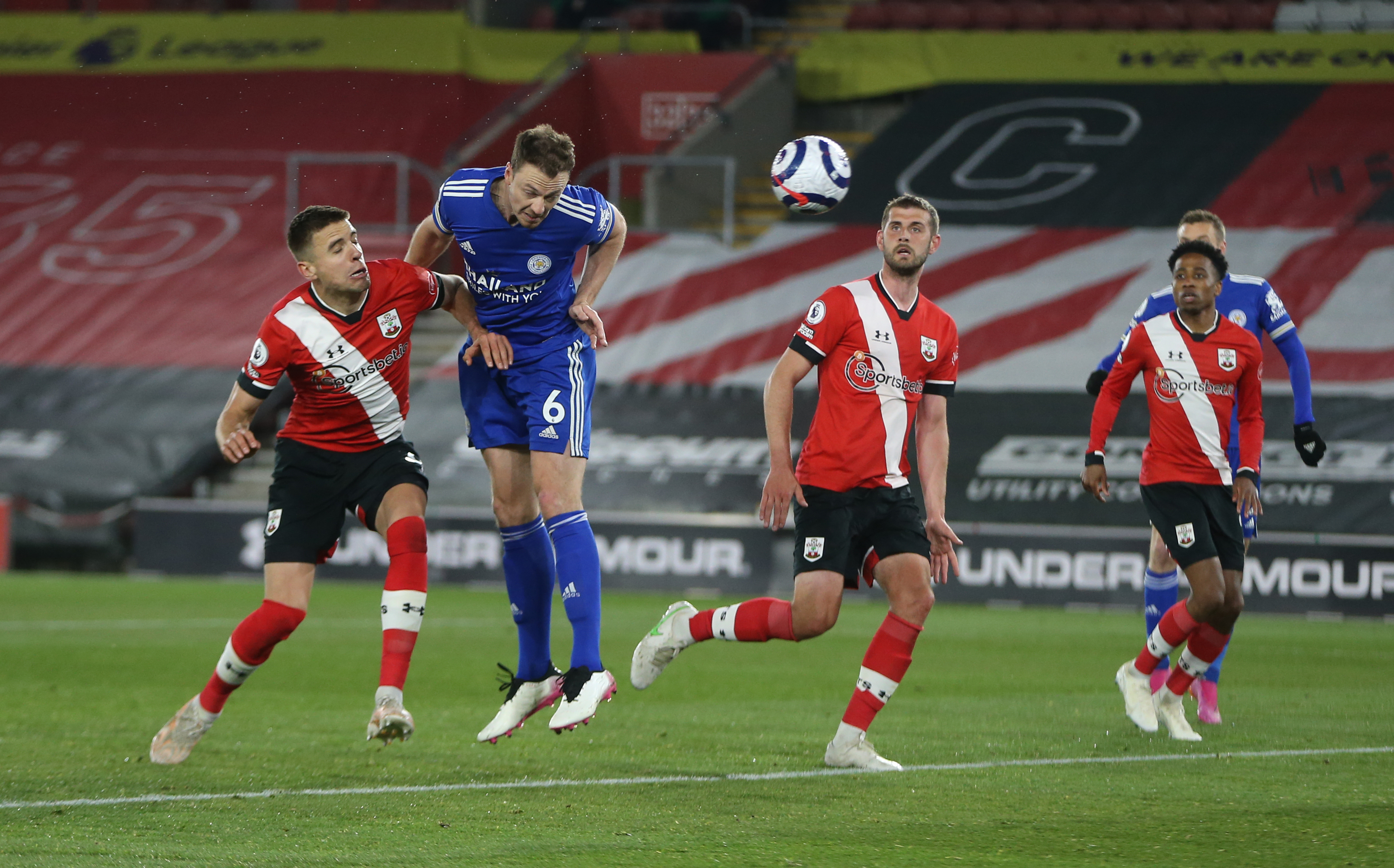 Jonny Evans headed in the Leicester equaliser with 68 minutes on the clockCredit: Jamie McPhilimey – The Sun 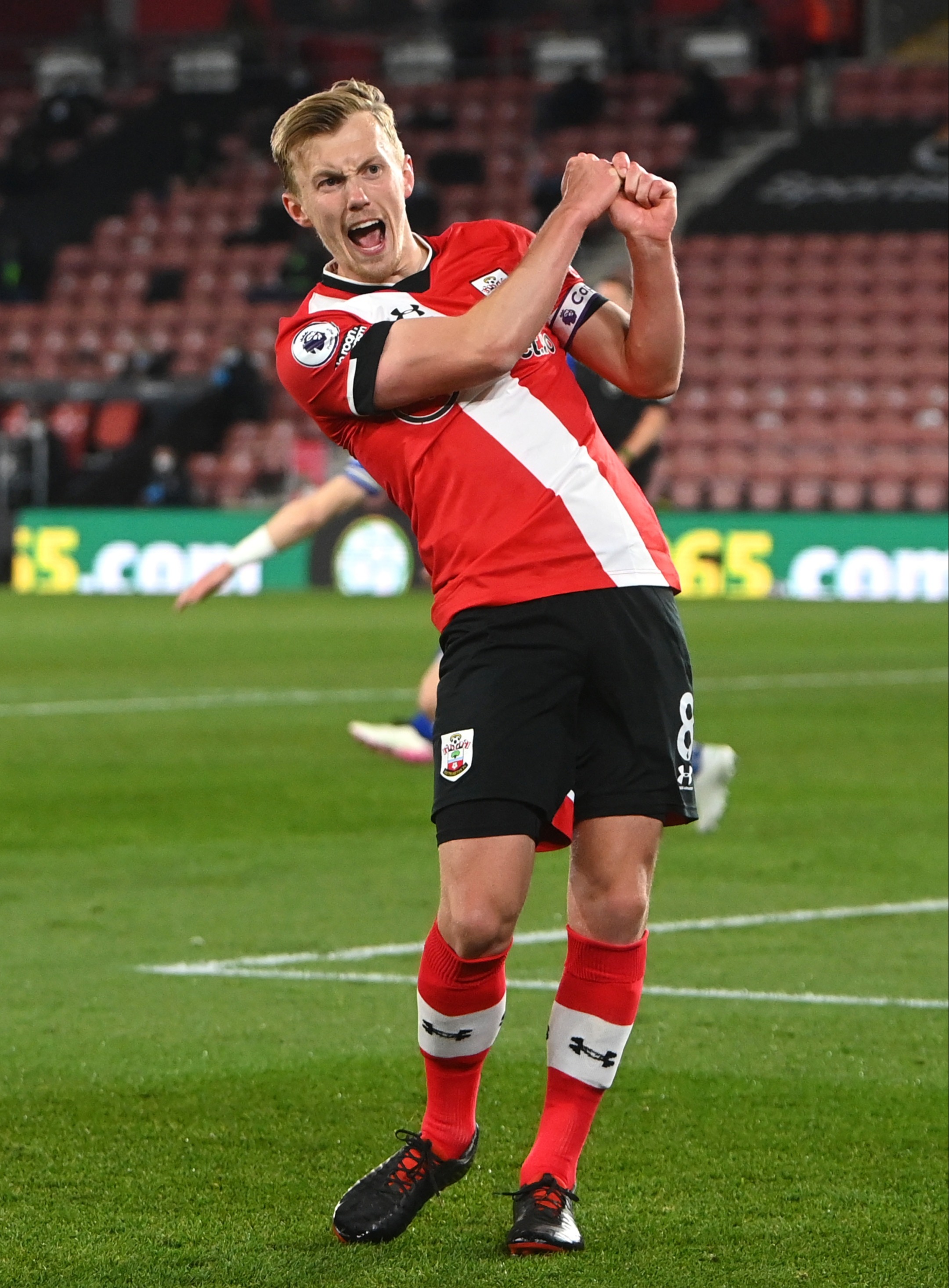 James Ward-Prowse brought out the golf swing to celebrate breaking the deadlockCredit: Getty

The rise up the table. The late collapse. The missed opportunity. Europa League instead.

This season was meant to be different, but a draw against ten-man Southampton after James Ward-Prowse’s second half penalty opens the door for an unwelcome episode of déjà vu.

The irony of Kelechi Iheanacho – with 12 goals in his last nine games – giving away the spot kick with a hand ball was not lost.

Jonny Evans grabbed the leveller, but Brendan Rodgers’ men were given every chance to earn their third win on the bounce thanks to an early present from the officials.

A tenth-minute straight red for Jannik Vestergaard after a lunge on Jamie Vardy was ignored by VAR – despite replays showing the Saints centre-back clearly won the ball.

But their attack fell flat on this occasion. Untimely to say the least.

West Ham – eight points behind in fifth with a game in hand – will once again be sniffing out an opportunity to make up some ground. The same goes for Chelsea in fourth.

As for Southampton, it is now 23 points dropped from winning positions this season, even if their response to the red card showed they have the fight to see out the run-in. 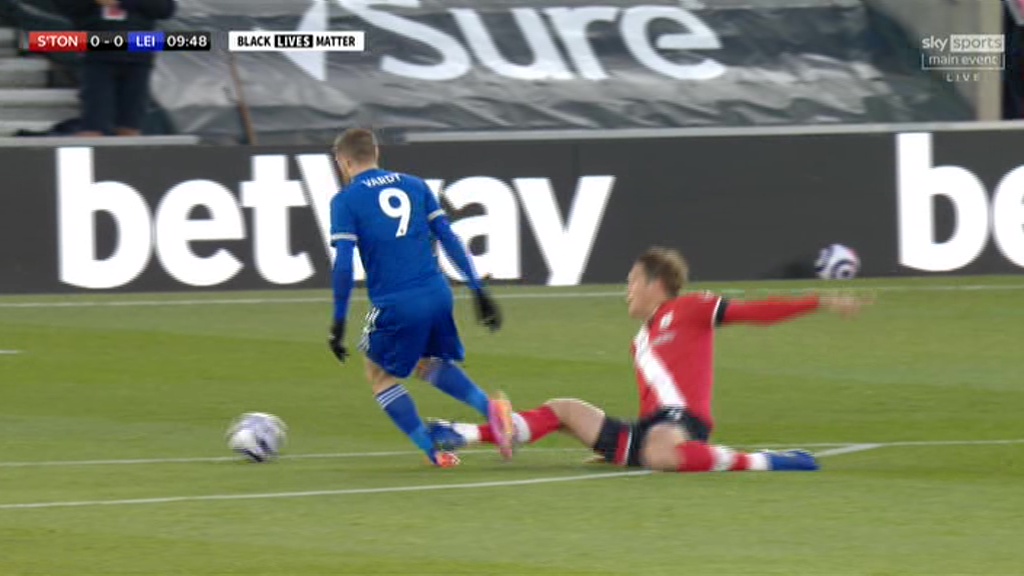 The defender touched the ball before catching Jamie Vardy high on the ankle as last manCredit: Sky Sports 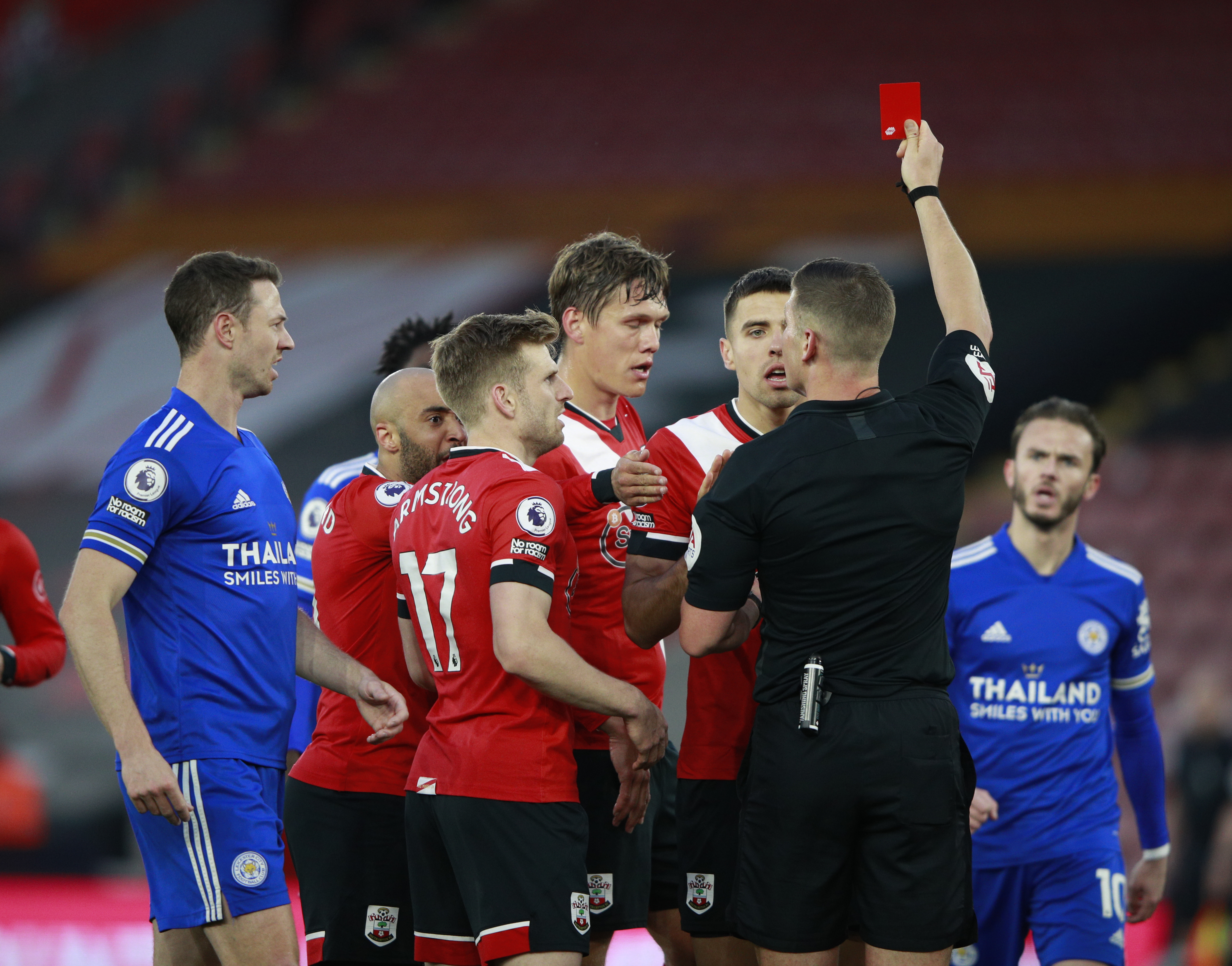 Yet Ralph Hasenhuttl will surely sleep easier once his side are mathematically assured of top flight football next campaign. Ten points clear of the drop, one more result is needed.

The Saints made three changes from their 2-1 loss to Tottenham last time out, including the absence of injured talismanic striker Danny Ings.

Leicester arrived with an unchanged line-up for the third game in a row, their last coming from behind to beat Crystal Palace 2-1 at the King Power.

But like against Palace, their high line was shaky. Kyle Walker-Peters’ goal inside two minutes was ruled out for offside and Caglar Soyuncu almost cost his team in his own box.

But Vestergaard’s lapse in concentration at the other end soon after ultimately changed the game for the wrong reasons.

Vardy pounced on Vestergaard’s slip and came off second best as the Saints defender appeared to have recovered well. But out came the card, and VAR remained silent.

Robert Jones – a relatively new addition to the batch of Premier League officials – was left to rely on his own gut decision instead of taking another look on the monitor.

The omens were not good. In the 9-0 collapse against the Foxes back in October 2019, a Southampton player was also sent off in the tenth minute: Ryan Bertrand.

And Vestergaard’s was the quickest red card since team-mate Alexandre Jankewitz’ at Old Trafford – another 9-0 thumping at the hands of Manchester United in February.

Take into account the last three games between these two sides sees Leicester ahead 15-2 on aggregate, and there were many that feared the worst.

Yet those fears were premature. Southampton reacted the brighter while Leicester were resigned to shots from distance and James Maddison’s free-kick grazing the post.

Rodgers responded at half-time by replacing Wesley Fofana with Ayoze Perez, but in the 61st minute, his side were behind as Iheanacho’s outstretched hand blocked Stuart Armstrong’s effort.

Ward-Prowse found the bottom corner – a moment which woke up the visitors as an unlikely source of goals seven minutes later saved the blushes of his strikers.

A surge ensued as the normally-deadly Vardy fluffed his lines on more than one occasion.

Leicester will be hoping this is the last time they fluff their lines in their heart-in-mouth bid for the grand European stage. 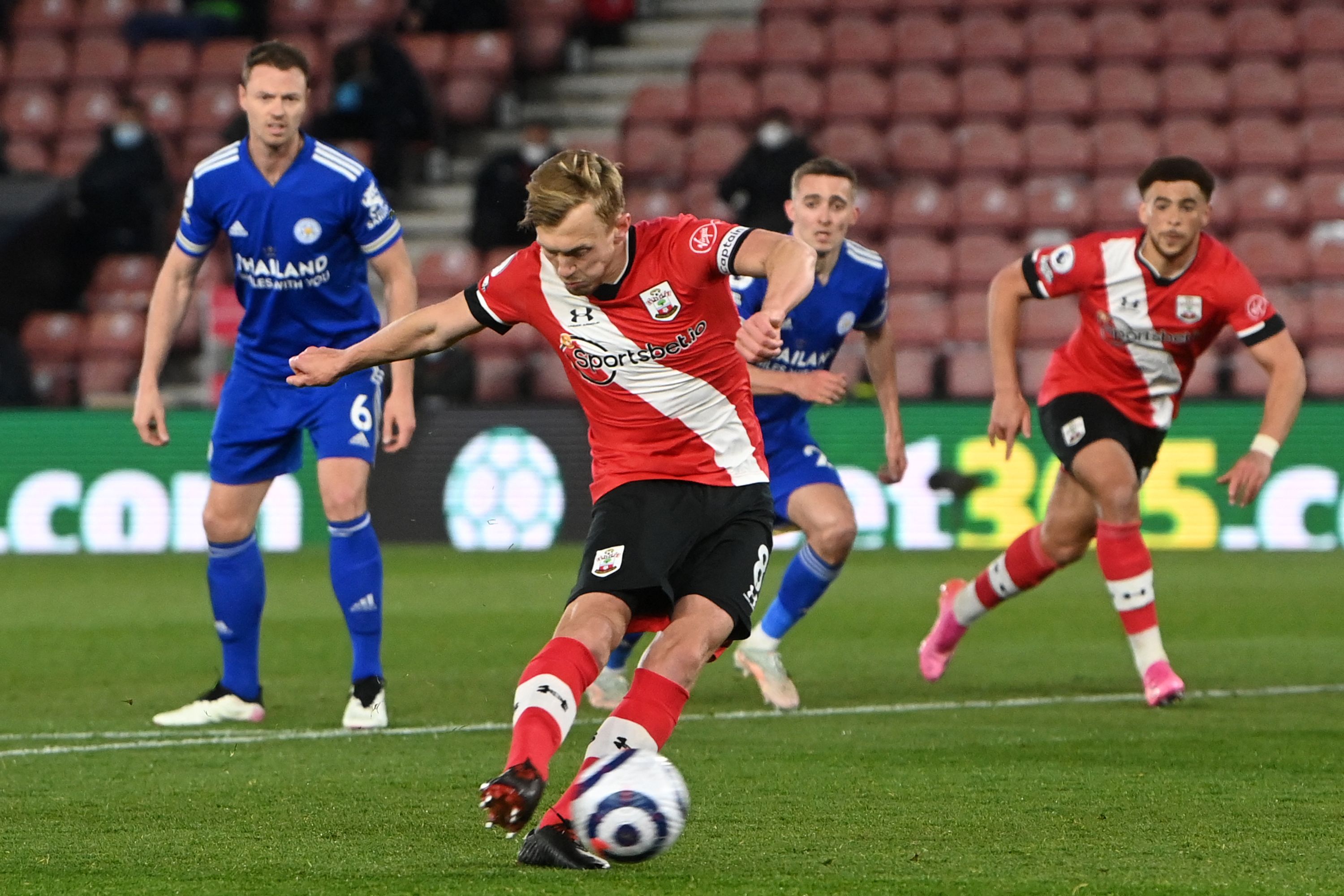 The Saints skipper fired into the bottom corner beyond the reach of Kasper SchmeichelCredit: AFP 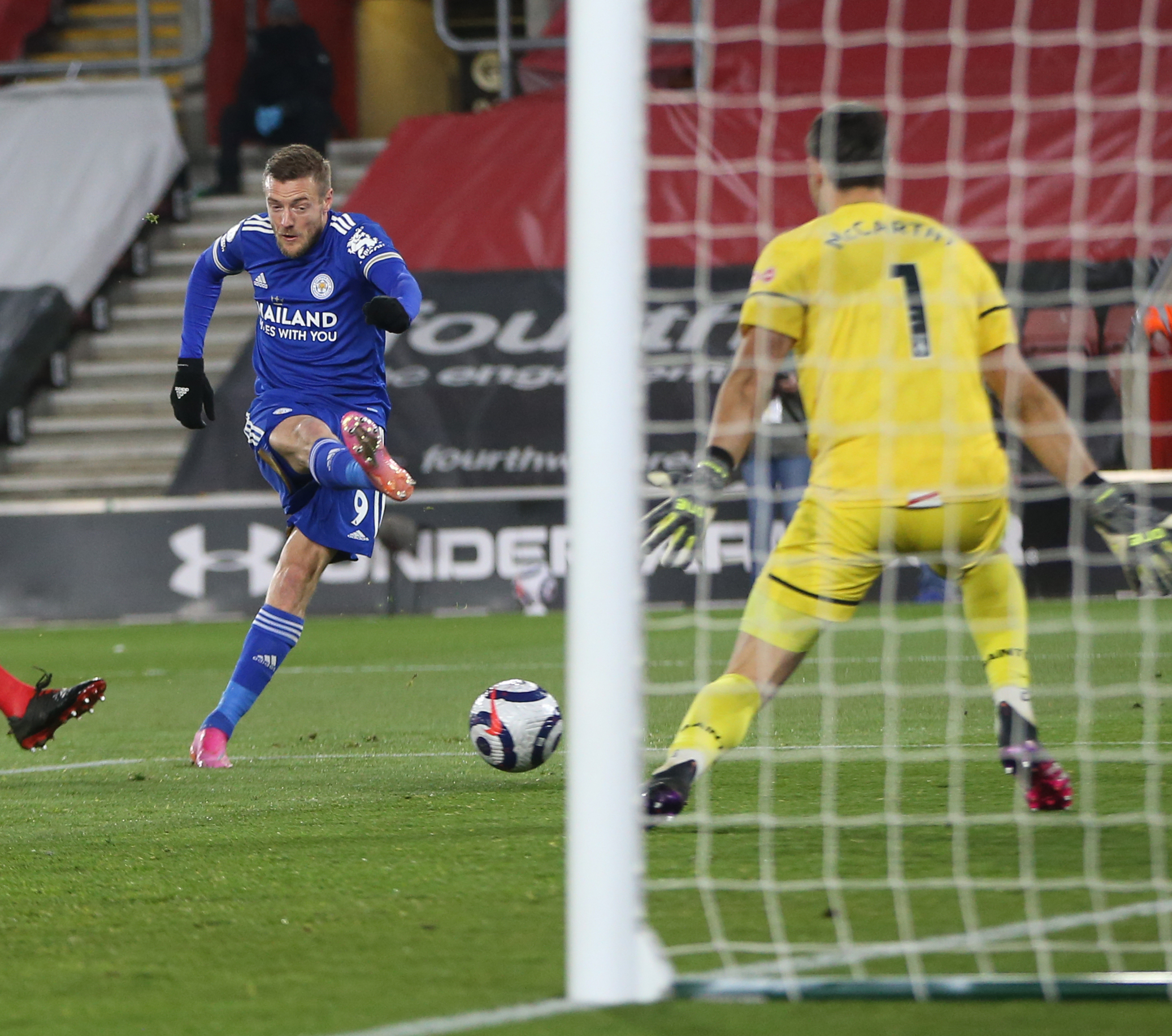 Vardy had a glorious chance to win the game late on but Alex McCarthy saved with his bootCredit: Jamie McPhilimey – The Sun 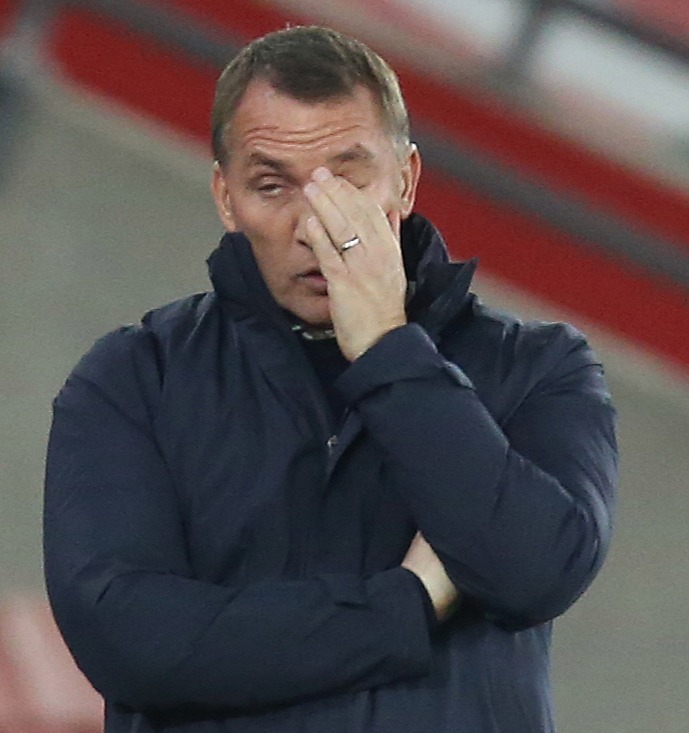 Brendan Rodgers cut a frustrated figure on the sidelines as his side failed to find a winnerCredit: Jamie McPhilimey – The Sun 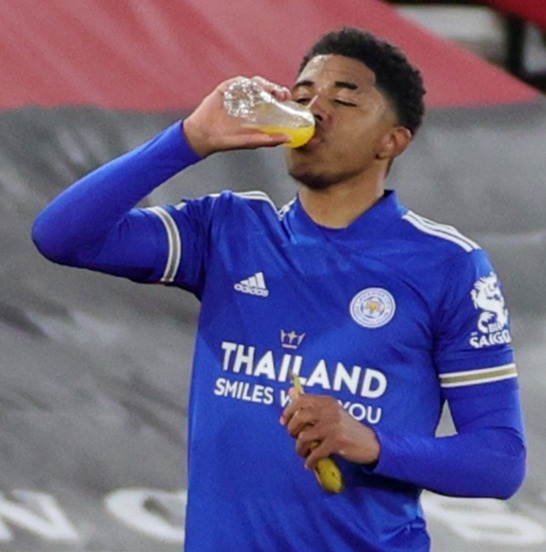 The game was paused momentarily in the first half to allow Wesley Fofana to break his fastCredit: Getty