ONCE again there were too many holes in Arsenal’s team and performance as Slavia Prague nicked a dramatic 1-1 draw in their Europa League quarter-final first leg at the Emirates.

And this time it was Tomas Holes who punished the Gunners’ tame efforts, thundering a headed equaliser deep in stoppage-time after a fine late opener from Arsenal sub Nicolas Pepe. 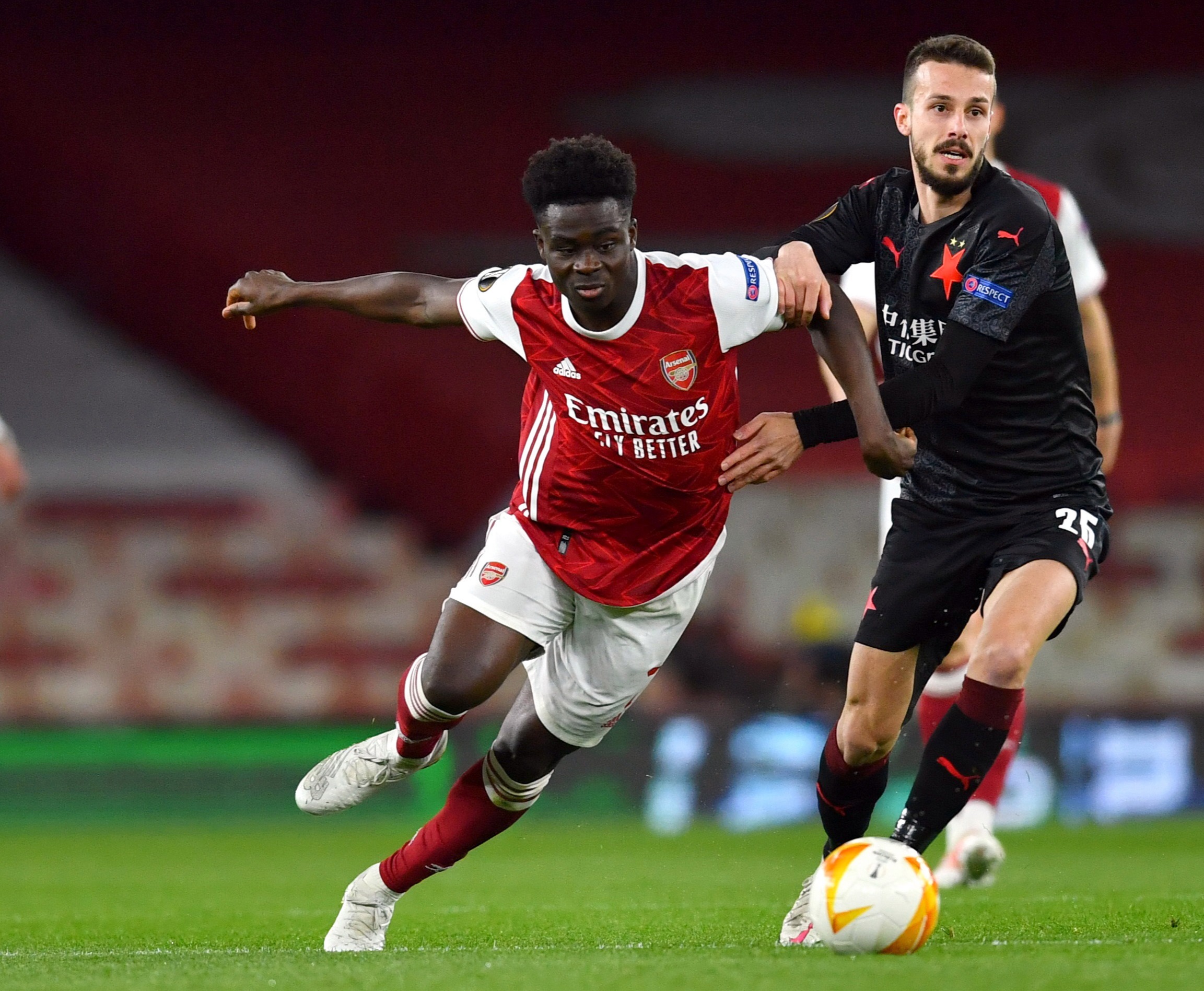 Bukayo Saka put in a string of crosses for the Gunners against Slavia Prague before fading in the second halfCredit: Reuters 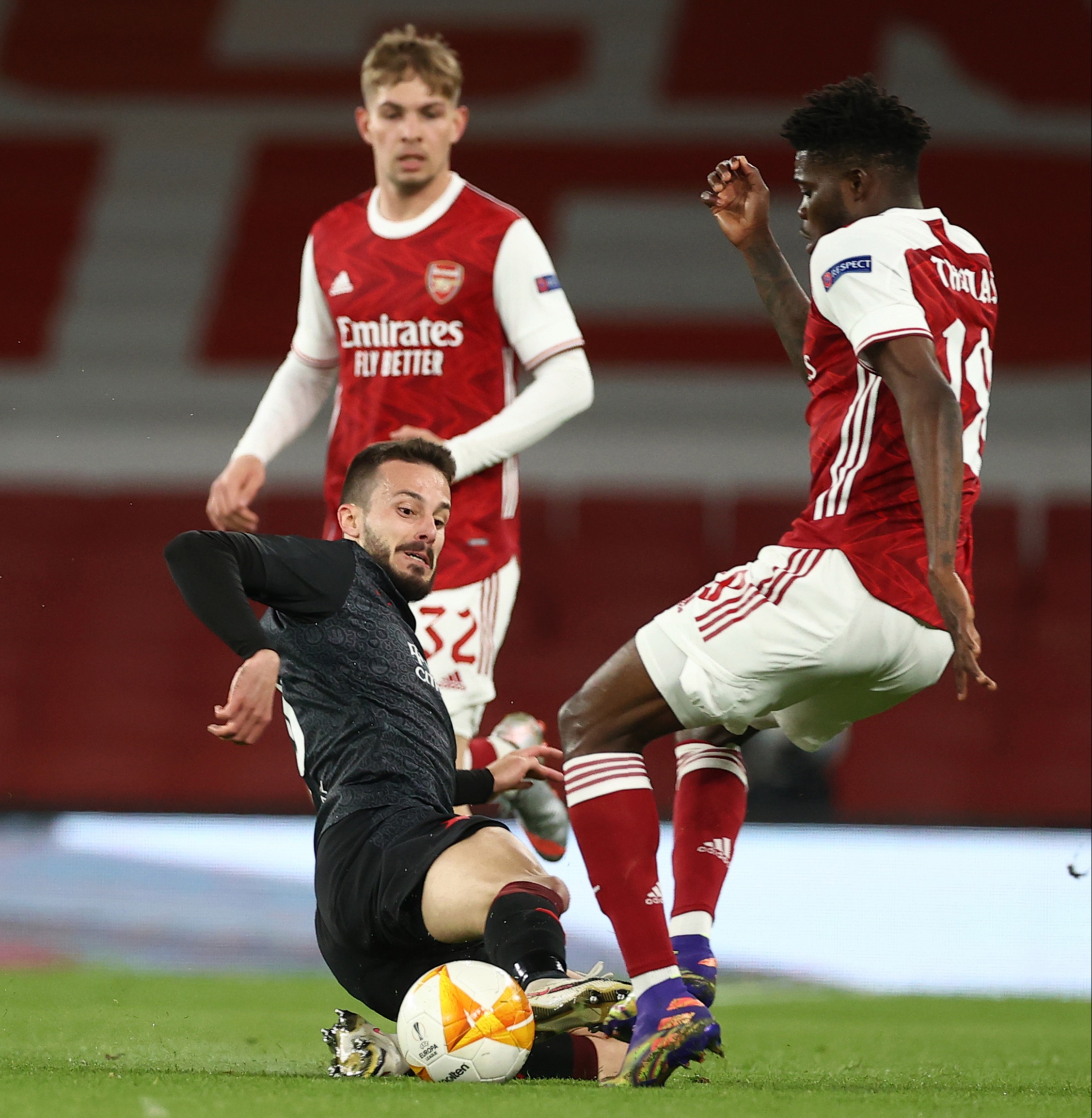 Thomas Partey tried to drive Arsenal forward, suggesting he is beginning to settle down after his summer switch from Atletico MadridCredit: The Sun

Busy Bukayo Saka and subdued Alexandre Lacazette each missed a glaring chance in a Gunners’ display that probably taught frustrated boss Mikel Arteta little he did not now.

Here’s how we rated Arsenal on another night that showed there is a gaping gulf between the Gunners and the Premier League elite they used to belong to.

An untroubled observer in the first half. Then made an excellent save with his legs while diving the wrong way when  Jan Boril drilled a low left-footer.

Steady enough. Hardly dynamic on the overlap from right-back, although with fast-raiding Bukayo Saka in front of him there was no need. Neatly fed Saka for the one gaping chance of the first period

Impressively busy for a centre-back, given he was scarcely called on in defence. Always keen to get Produced one useful cross before leaping well to head a centre from Cedric over.

Little to do, but disappointingly headed a reasonable chance straight into the ground from ten yards midway through the first period

Left-back linked up smoothly but rather tamely with Arsenal’s midfield. Like so many of Arsenal’s players, didn’t do much wrong but lacked impact.

Tried to drive the Gunners forward from the middle of the pitch, showing signs he is settling down after injuries following his summer arrival from Atletico Madrid. Strode forward to spread play for bellerinn, whose cross led to Saka wasting a glorious opportunity. Swerved a low 25-yarder wide of the post towards the end.

Lacked real influence in the middle of the pitch, and failed to reignite the Gunners when Slavia got back into the contest after the break.

Anonymous in the opening 45 minutes, the Brazilian then curved a brilliant free-kick of the near post from just outside the right of the area.

Typical of his team – more subdued than he should be for a creative midfielder when his side are dominant. But some tidy touches.

The dominant figure of the first half, with a string of crosses, often beating his man with ease before flashing the ball over. But it didn’t quite add up to as much as it should have, especially when he cut inside and slotted a should-score chance wide of the far post. Faded noticeably before

Limited contribution on and off the ball – apart from two goal attempts highly mediocre for a player of his pedigree. He slashed a decent opening wide before the interval. Then he burst clear from halfway midway through the second period for an astonishing miss. Opening up his body as he reached the area and slowed down, the Frenchman sidefooted a right-footer off the right of the cross bar as the keeper approached.

Burst into life by rasping an angled left-footer just high.

Sliced a glaring opening wide from virtually his first touch. But was lively after that

superb control and composure to surge through on 86 minuted and dink the winner in over diving keeper Kolar. But it was Pepe’s knee that unluckily deflected through for Holes to thunder the equalier deep in stoppage time