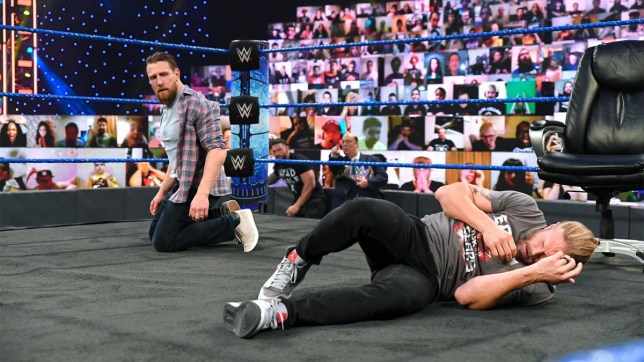 Daniel Bryan made a statement at Edge’s expense (Photo: WWE)

Tensions were simmering on WWE SmackDown this week and Daniel Bryan ended the show by taking out Edge.

The Leader of the Yes Movement could be primed to repeat history and find his way into the WrestleMania 37 main event with the Rated R Superstar and Roman Reigns as the storyline really heats up going into Fastlane.

Edge started the show, targeting the Tribal Chief before urging Bryan not to doubt his passion for wrestling.

Eventually, Bryan interrupted him and suggested the Royal Rumble winner should have respected his drive and desire to put himself in the best spot.

Bryan’s playing this up as potentially his last WrestleMania, and he noted that he can’t live with the idea of being on the back burner.

The two traded verbal jabs well here, as a damn fine opening to the night.

During the night, Jey Uso tried to speak to Reigns, but Paul Heyman told him not to go into the locker room.

Instead, Edge found the former tag team champ backstage and warned him he was wasting his talent under Roman.

At the end of the night, we had the much-hyped contract signing – but the Head of the Table immediately told Bryan he’d changed his mind and didn’t want to give him a title match at Fastlane because he doesn’t deserve it.

Bryan played up to this brilliantly, goading Reigns by calling himself ruler of the island because he made Jey tap out – which his cousin never managed to do – and branding the Universal Champion a coward. 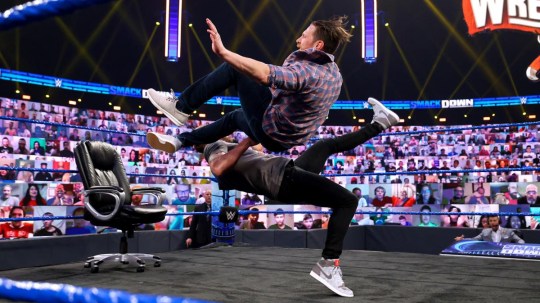 Eventually, he signed the contract and Uso lobbed the table out of the ring and put himself forward to be a special guest enforcer for Fastlane.

Edge came out, loving the idea but revealing next week he’ll have his first TV match in around a decade against Jey – and the winner will be the enforcer at ringside.

This sparked a huge brawl, with the Rated R Superstar throwing Bryan away from Reigns – only to be hit with a massive running knee to end the show.

Before the opening eight-man tag match could Otis, Chad Gable and the SmackDown Tag Team Champions Dolph Ziggler and Robert Roode attacked their opponents, and mocked the Street Profits, Dominik Mysterio and his dad Rey.

This was a good opening match, with everyone doing their bit to make it work despite being overcrowded – and Montez Ford earned a big win for his team.

Backstage, Kayla Braxton chatted to Seth Rollins and mentioned Cesaro’s giant swing on him, which didn’t go well at all as he claimed he wanted to help the Swiss Cyborg, only to be humiliated.

After branding his rival the biggest waste of potential in WWE history, Rollins was at ringside for Cesaro’s match with the SmackDown Saviour’s former disciple Murphy.

It was a sprint and dominant showcase for Cesaro, who’s enjoyed a fine singles push at long last – even if his win tonight came after Seth attacked him and planted him with the stomp.

Heading backstage after officials stopped him doing further damage with a chair, Rollins bumped into Shinsuke Nakamura – which could easily be a great Fastlane match to save Seth and Cesaro for ‘Mania. 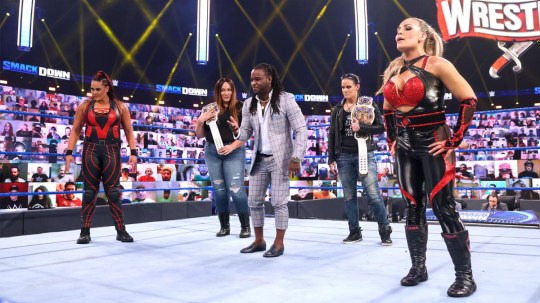 Reginald doesn’t need to be in this spot (Photo: WWE)

Elsewhere, Nia Jax and Reginald starred in a funny shopping skit getting the sommelier some new threads, while Shayna Baszler played her deadpan role well.

After denying a documentary pitch from Sami Zayn, Kevin Owens hosted the KO Show with Sasha Banks and Bianca Belair, with the two starting strong with some real tension between them, which is much-needed so close to WrestleMania 37.

The tag title side-story isn’t quite so necessary, especially when the Legit Boss and EST of WWE lost to Tamina and Natalya tonight due to Reginald’s interference.

Moving over to the Intercontinental Championship scene, Big E cut one of his best ever promos on Apollo Crews, insisting he can get one more title shot but only to give him the beating he deserved.

When Crews didn’t show up, the champ offered an open challenge, which Sami Zayn accepted after beating King Corbin to the ring – and they worked together brilliantly to put on a damn fine match.

E retained the gold with a Big Ending, only for Apollo to make his presence felt as he attacked the champ from behind with two Olympic Slams before another attack with the stairs to leave his rival lying outside the ring.