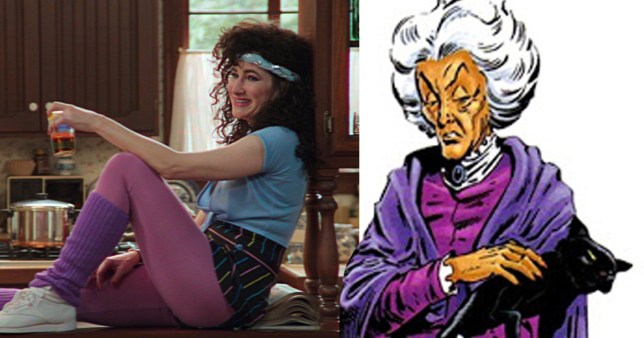 The clues were all there… but did you spot them? (Picture: Marvel Studios/Disney)

Warning: spoilers up to episode eight of WandaVision.

Very soon, episode nine of WandaVision is set to be released on Disney Plus, with the finale bringing the first season of one of the most exciting and experimental launches in the MCU (Marvel Cinematic Universe) to an end.

While Marvel fans have loved delving deeper into the relationship between Wanda Maximoff (Elizabeth Olsen) and Vision (Paul Bettany), the series has also introduced a menacing new star to the cast – Kathryn Hahn as their neighbour Agnes, who turns out to be a powerful witch named Agatha Harkness.

For those familiar with the comic books, there were many who had suspicions that Agnes would eventually reveal herself to be Agatha, who in the original source material becomes a mentor to the Scarlet Witch.

Did you spot the clues that Agnes was really Agatha in disguise?

It’s all in the name

One of the most simple and obvious clues that Agnes would turn out to be Agatha – perhaps too obvious – was the fact that their names are extremely similar, starting with the same first two letters. 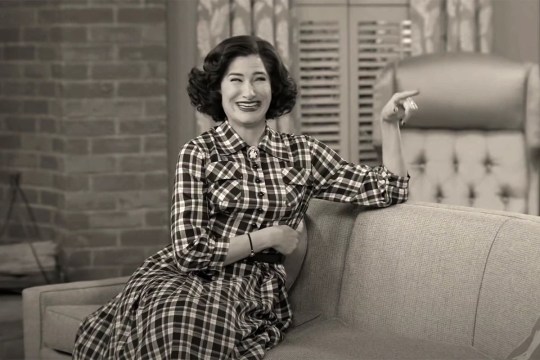 Some viewers may have assumed this would turn out to be a red herring.

But others stayed true to their belief that it was Agatha All Along, as the song goes.

Agnes has no real-life identity

While trying to understand Wanda’s Hex, those involved in the investigation – including S.W.O.R.D. agent Monica Rambeau (Teyonah Parris), FBI agent Jimmy Woo (Randall Park) and astrophysics expert Darcy Lewis (Kat Dennings) – start identifying the individuals that they spot in the neighbourhood of Westview.

When Dr. Darcy Lewis and Jimmy Woo are discovering the names and roles of the residents and pinning them to the board Agnes’ file is not coincided with a NJ state ID like the rest of them ð¤ meaning she’s not from there? Furthering the Agatha Harkness theory? #WandaVision pic.twitter.com/TOiK1dMcBX

However, while the majority of the people spotted in the sitcom-style reality through the TV monitors are identified as real people with IDs, as shown on a large board, Agnes is not.

It’s curious that Agatha’s lack of a real-life identity hasn’t been raised among the investigation team as something that requires further exploration.

Significance of her brooch

This is an intriguing observation on its own, considering the many outfit changes that the characters go through while shifting between different eras of American sitcoms.

But on top of that, the brooch bears a strong resemblance to an accessory worn by Agatha in the Marvel comics.

As we learnt at the start of episode seven, this brooch was actually stolen by Agatha from her mother, who she killed along with the rest of her coven in the 17th century in Salem, Massachusetts.

Just like Agnes’ name, her choice of costume for the ‘Halloween Spooktacular’ episode seemed almost too on the nose to be an indication that she was actually Agatha. 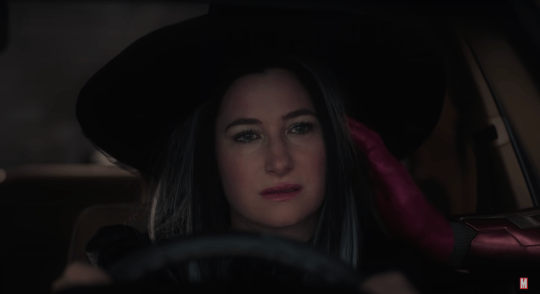 Some may have thought the witch hat was just too blatant a clue (Picture: Marvel Studios/Disney)

But alas, sometimes the most obvious clues are the ones you should pay attention to.

While she could have gone as anything, Agatha – then still posing as Agnes – decides to dress as a witch for Halloween, fooling Vision into believing she is under the same trance as the rest of Westview’s residents.

There are a couple of instances before she reveals her true identity that Agatha hints that she isn’t under Wanda’s spell like everyone else.

On one occasion, Agnes appears to mess up her lines and asks Wanda whether she should do her take again, causing Wanda to become utterly perplexed. 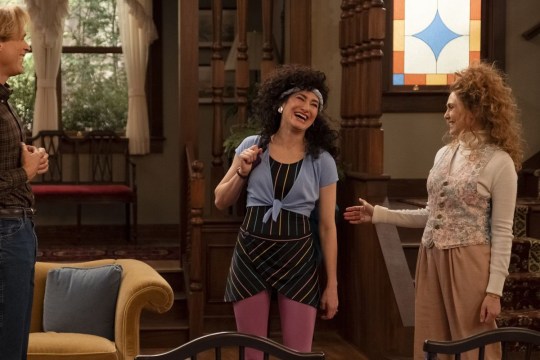 Another scene sees Agnes warn Vision that Monica is not to be trusted, before Monica’s expulsion by Wanda from the Hex.

While fans may have thought that Wanda was simply losing control when these incidents occurred, they were actually proof that Agatha was the one pulling the strings.

Of all the residents of Westview, Agnes has always been the one that Wanda and Vision have been closest to, from all the way back to the 1950s episode when she virtually invited herself into their home.

Agnes even made her way into their sitcom-like introductions, implying that she is pretty much one of the family.

In the comic books, Agatha teaches Wanda how to harness Chaos Magic as her mentor.

While Agatha appears to be the main villain of WandaVision, there is a possibility that her journey as a companion of Wanda’s isn’t over just yet.

WandaVision is available to watch on Disney Plus with the next episode being released on Friday.