This week, Eamonn and Ruth returned to host This Morning during the Easter holidays, shortly after Eamonn was treated in hospital for the chronic pain he has been suffering as of late.

On Monday, Eamonn explained the cause of his agony to viewers, saying that around a month ago, he ‘hurt his back’ but ‘didn’t really do anything’ about it, resulting in the injury getting ‘worse and worse and worse’.

However, when Keith – whose real name is Leigh Francis – tuned in via video chat to speak to the pair about the new series of Celebrity Juice, Ruth revealed that a game Eamonn took part in on the show several years ago could be the root of it all.

‘Keith I’ve got a bone to pick with you actually, because you may know my husband has been in a lot of pain with his back. Nobody’s quite sure what he’s done. Well they know what he’s done but they don’t know how he’s done it,’ she said.

Addressing Eamonn, she continued: ‘I remembered, it wasn’t a show that we were on together, you were on on your own, and you came home and you said, “Keith Lemon whacked me in the back with something”.’ 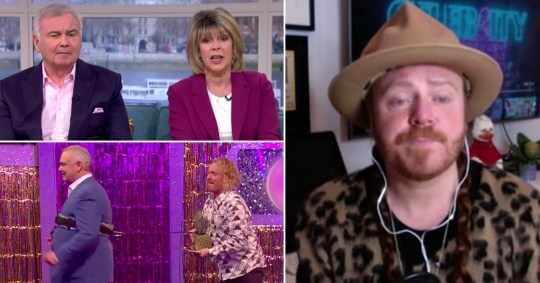 The clip shows Keith flinging a pineapple into Eamonn’s back (Picture: ITV)

Eamonn remarked: ‘He abused me,’ to which Ruth replied: ‘“He abused me,” you said. And I thought I can’t believe that with Keith. But watch this!’

They then showed a clip from the third episode of Celebrity Juice’s 12th series in 2014, when Eamonn participated in a segment called ‘W.T.F.I.H.M.I.T.B (What The F*** Is Hitting Me In The Back)’.

In the clip, Eamonn had a contraction tied to his waist, with a pineapple attached to a piece of elastic that Keith then flung into his back.

‘So he whacked you very hard in the back with a pineapple,’ Ruth stated after watching it back.

While Eamonn chimed in that it was ‘nothing really’, Ruth then added: ‘Keith – it could be you! You could have injured him.’ 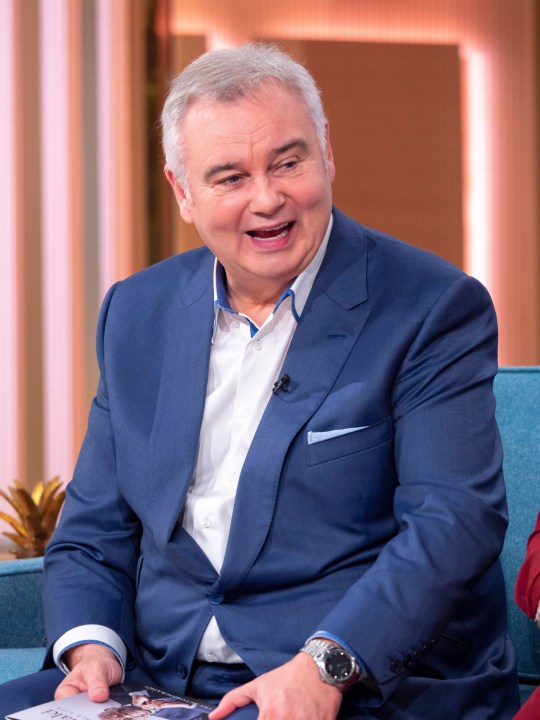 Eamonn has been powering through This Morning after his hospital trip (Picture: Ken McKay/ITV/REX)

Keith extended a heartfelt apology for possibly causing Eamonn harm, saying: ‘I really do apologise and I’m sending you magical powers to heal your pelvis, because I thought it was your pelvis that you’d hurt. And I hope you’re feeling better. Are you feeling better?’

However, when Eamonn and Ruth both said that he wasn’t doing any better, Keith decided to make light of the situation, mockingly replying: ‘Oh stop moaning, all you do is moan. I’m going to moan about you on Twitter,’ with the couple bursting into laughter.

When Keith’s interview was over, the presenting duo were full of praise for the comedian.

‘He is the loveliest guy though, isn’t he?’ Ruth said.

Eamonn is set to appear in the new series of Celebrity Juice, having filmed the show last week while suffering from his chronic pain.

This Morning airs weekdays at 10am on ITV.