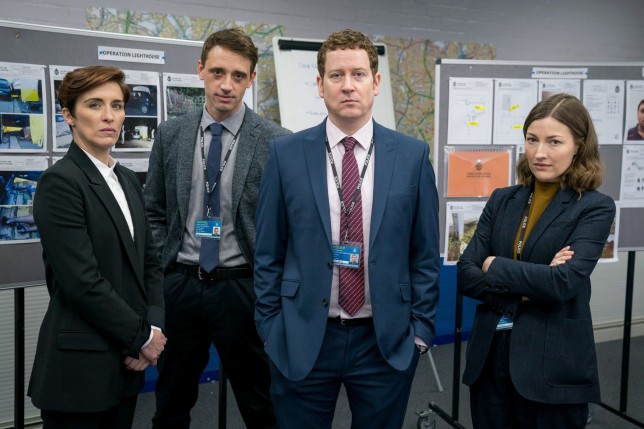 Did you spot all the Easter Eggs in series six? (Picture: Steffan Hill/BBC/World Productions)

Line of Duty series six has been an absolute rollercoaster, with all of the secret meetings, high-octane action and whispers of corruption leading up to Sunday’s highly-anticipated finale.

As fans carefully watch the BBC crime drama for any signs of Easter Eggs or clues about the investigation into the murder of journalist Gail Vella (Andi Osho), one big question continues to linger of the heads of Kate Fleming (Vicky McClure), Steve Arnott (Martin Compston) and Superintendent Ted Hastings (Adrian Dunbar) – who is ‘H’?

There has been speculation that ‘H’ could be the stone-cold Patricia Carmichael (Anna Maxwell Martin) or Marcus Thurwell (James Nesbitt), despite the latter only appearing in the show in pictures so far.

While keeping up to date with the latest goings-on of AC-12, some fans kept note of various Easter Eggs that could hint at how the finale will unfold.

From a letter from Chief Constable Philip Constable (Owen Teale) to the golf clubs in office of Detective Superintendent Ian Buckells (Nigel Boyle), here are the Easter Eggs you may have missed.

In the trailer for series six, one brief moment shows a magazine with Gail Vella on the cover.

The headline emphasises Gail’s commitment to unveiling the truth with her news reporting, stating: ‘Speaking Truth to Power.’

However, some eagle-eyed fans noticed a QR code at the bottom, which when scanned with their smartphone camera, opened an intriguing document…

After scanning the QR code on the magazine, fans were taken to a Google Drive document titled ‘Operation Easter Egg Hunt’. 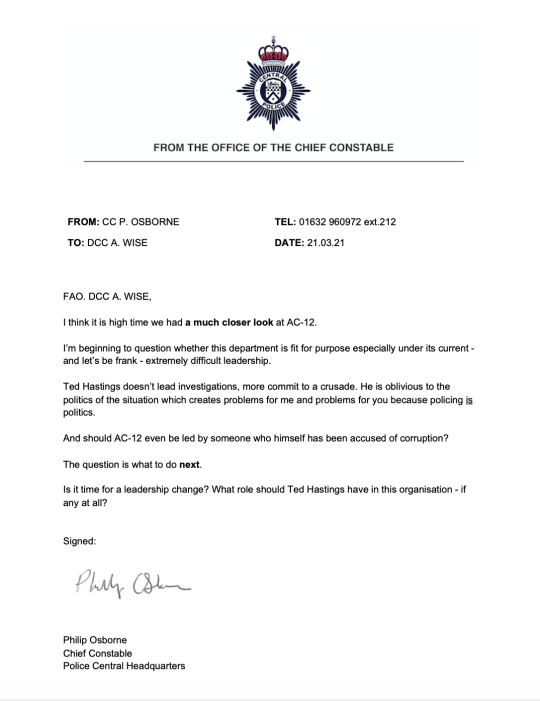 Osborne writes: ‘I think it is high time we had a much closer look at AC-12,’ before expressing his belief that the department may no longer be ‘fit for purpose’ particular ‘under its current – and let’s be frank – extremely difficult leadership’.

After questioning Hastings’ ability to run AC-12, Osborne asks whether it may be ‘time for a leadership change’, before asking if Hastings should have any future within the police force.

Not only was the letter extremely illuminating over the direction that series six would go down, but it also provided another clue.

If those reading it hovered over the word ‘next’ in the sentence: ‘The question is what to do next,’ they would find a link to yet another interesting document.

The next document on the Easter Egg trail linked to from Osborne’s letter was Steve’s prescription note, which detailed how he had been provided with medicines including Ibuprofen and Codeine, Pitradine and Charzepam. 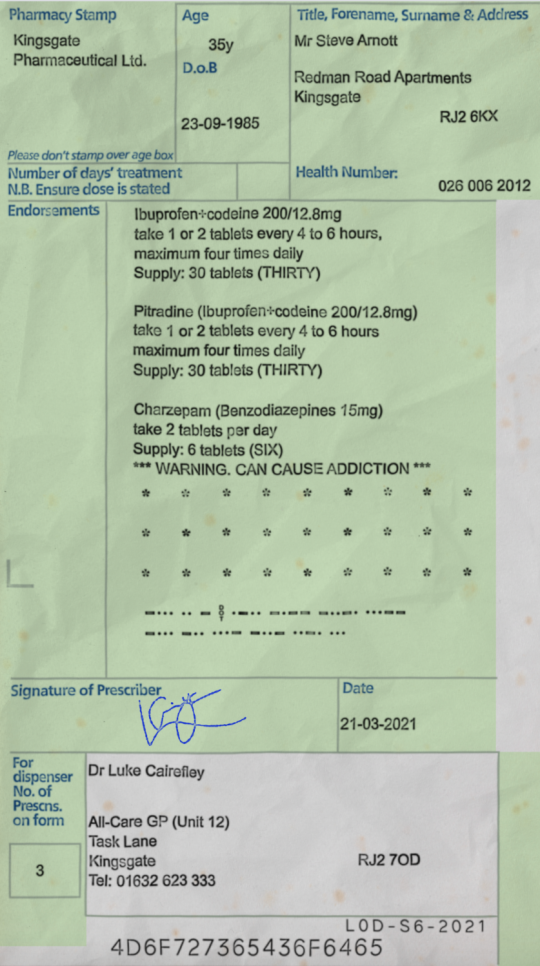 Steve’s prescription note for medicine to treat his back pain (Picture: BBC)

As we now know, in series six Steve struggles with dependency to his medication while suffering from an agonising back pain.

But yet again, his prescription note is not the end of the Easter Eggs provided ahead of the show’s launch.

Underneath the list of medicines, there is a sequence of morse code, which some fans discovered led to an unlisted YouTube video of a news report presented by Gail Vella.

In the video, Deputy Chief Constable Wise and then-Police and Crime Commissioner Rohan Sindwhani address reporters on an inquiry into police corruption. 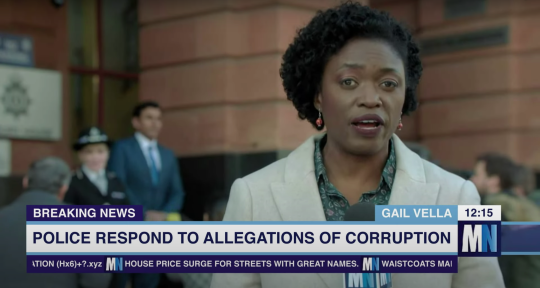 ‘The Deputy Chief Constable and I are pleased to report that Operation Pear Tree has conducted a thorough investigation into institutionalised complicity between organised criminals and corrupt police officers. Its robust findings couldn’t be clearer – there is no institutionalised corruption in this police force,’ Sindwhani says.

Gail then speaks to the camera, stating: ‘Operation Pear Tree, the inquiry described as the most thorough ever undertaken into police corruption is now officially closed.

‘Some will wonder why this news is being announced over a holiday weekend. Cynics might conclude the Police and Crime Commissioner would prefer his statement isn’t examined too closely.

‘Perhaps Mr Sindwhani has learned the secret to high office appears no longer to reside in revealing the deepest truths, but in telling the most attractive lies. Gail Vella, reporting from Central Police Headquarters.’

You can watch the news report here.

While watching series six, many viewers were quick to notice a set of golf clubs resting in the corner of Buckells’ office.

What’s more, some also noticed various golfing pictures up on his walls, in what could be interpreted as an evident nod to ‘The Caddy’, bent copper Dot Cottan (Craig Parkinson), who was nicknamed as such after carrying the golf bags of criminal Tommy Hunter (Brian McCardie) when he was younger.

While to Line of Duty viewers, Ryan Pilkington (Gregory Piper) was evidently a bad egg from the start, when Kate first came across him in series six, she had a bit of trouble figuring out where she knew him from.

Before she learned of his connection to organised crime, she appeared to be slightly suspicious of him and how he came to be in her unit.

In one scene, fans spotted Kate looking at his picture on her computer, a sign that she had a feeling that something was undertoward about the young police officer from the start.

‘H’ popping up in plain sight

While mysterious corrupt police officer ‘H’, referred to by Hastings as ‘The Fourth Man’, may not have been revealed yet, it appears ‘H’ has popped up on a few occasions… in a way.

When Steve is at Steph Corbett’s (Amy De Bhrún) house, a tile in her kitchen appears to feature an H-shaped design.

On another occasion, when Hastings meets Kate for a covert meeting in an underpass, the letter ‘H’ is visible in some bold graffiti.

This detail was noticed by The Chase star Jenny Ryan, who tweeted: ‘Not that I’m going OTT with the #LineOfDuty analysis here but check out the graffiti between Hastings and Kate here.’

She then added: ‘I do think that the production team have had a bit of fun slipping in the letter H to the background during this series. Cheeky buggers. #LineOfDuty.’

The Line of Duty series six finale airs on Sunday at 9pm on BBC One.