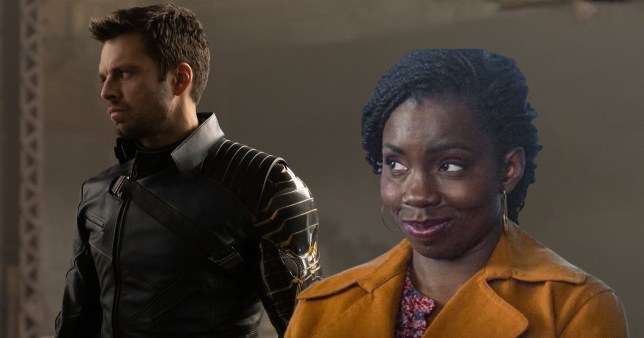 The Falcon and The Winter Soldier star Sebastian Stan has urged Marvel to ‘Release The Bucky Sarah Cut’ following the epic series finale on Disney Plus… and we are so here for more Bucky Barnes and Sarah Wilson flirting.

Bucky (Sebastian) goes through quite an extraordinary transformation in the MCU’s Falcon and The Winter Soldier – learning how to trust through his friendship with Sam Wilson (Anthony Mackie), moving on from his violent past as a brainwashed assassin and even getting back into the dating game.

When he goes to visit Sam at his family home in Louisiana, Bucky meets his fellow Avenger’s sister Sarah (Adepero Oduye)… which is when the centenarian proves he’s still got what it takes to pull off his old-school swagger.

After Bucky introduces himself with a charming smile, Sarah responds in the same way, with Sam looking puzzled as he watches the flirtatious exchange unfold.

While Bucky and Sarah’s chemistry excited fans beyond measure, many are hoping Marvel will release more footage of the characters enjoying a cheeky flirt – and both of the actors are all for the it.

After a longer clip of Baron Helmut Zemo (Daniel Brühl) dancing in Madripoor was released following calls to ‘Release The Zemo Cut’ – inspired by the DC fan campaign to ‘Release The Snyder Cut’ of Zack Snyder’s Justice League – a new hashtag has now been launched, titled ‘#ReleaseTheBuckySarahCut’.

Director Kari Skogland confirmed to TV Guide that there is more ‘a little more flirting’ that fans didn’t get to see, stating: ‘We did have a bit more from that scene we decided not to put in, but it was very enjoyable.’

Sebastian has thrown his support behind the idea of extended footage of Bucky and Sarah being released, sharing a post on his Instagram Story with the hashtag.

This was followed by Adepero’s response, who screenshotted her co-star’s Instagram Story and tweeted: ‘oh word Sebastian?! leggo! #ReleaseTheBuckySarahCut.’ 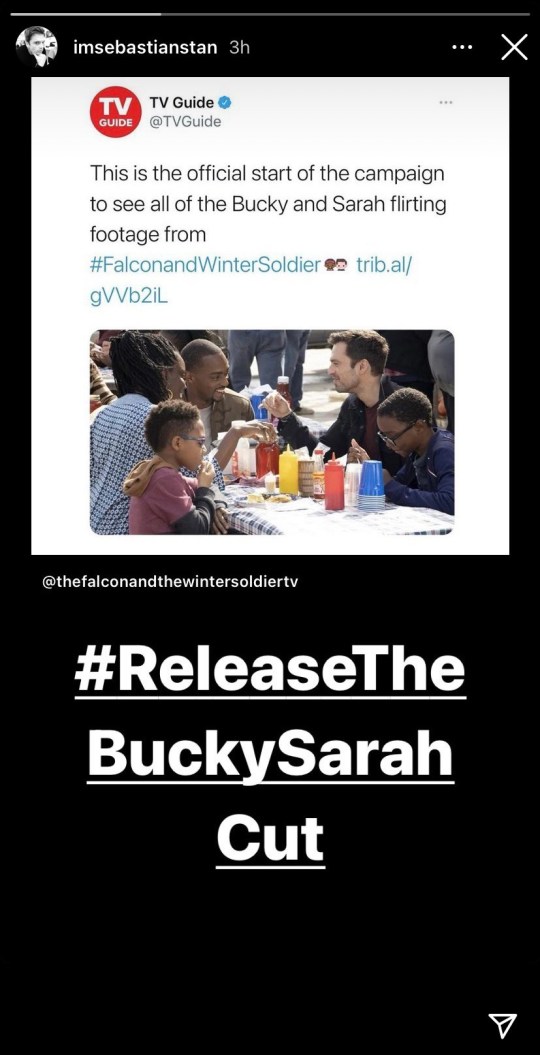 The campaign has the seal of approval from Sebastian (Picture: Instagram/@imsebastianstan)

While we’re not sure Sam would be too happy about more evidence of his friend and sister flirting being released into the world… we’re desperately hoping the powers that be at Marvel will make it happen.

Following the conclusion of the Marvel series, showrunner Malcolm Spellman explained why Spider-Man didn’t show up in the finale, despite a significant portion of the episode being set in New York.

Speaking to Inverse, the writer said that ‘of course’ Peter Parker turning up was considered, but this notion was quickly shut down by Marvel Studios boss Kevin Feige.

‘Then Kevin Feige [Marvel Studios president] tells you, “No. Stop it,”’ he said.

‘Listen, when you first show up to these projects, in your mind you think you’re gonna get to use everybody in the MCU,’ he explained.

‘But Marvel always asks, “Does this person belong in this story? You cannot just geek out and put all of our characters in your project because you like them. They have to occur organically.” So Spider-Man did not make it.’

The Falcon and The Winter Soldier is available to watch on Disney Plus.