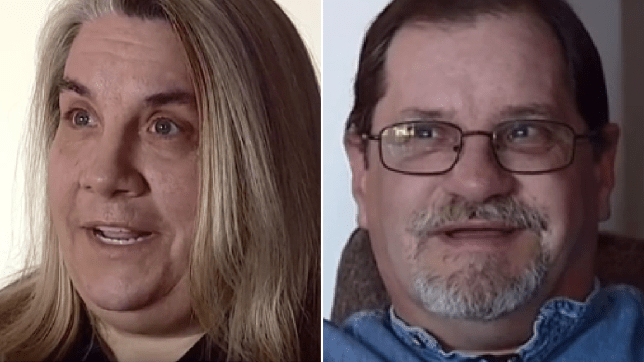 Karen Warner, 51, was stunned to discover she had a twin brother – and even more shocked to find long lost sibling Michael Jackman, right, living just six blocks away from her (Pictures: WXIN)

A pair of twins who were separated at birth finally found one another aged 51 – and discovered they had been neighbors and old school friends all along.

Karen Warner, from Elwood in Indiana, always knew she was adopted, and recently began digging into her family history to try and find out some medical information.

But she was floored to discover that she was a twin. Karen recalled: ‘I called my daughter, and I said, “Oh my gosh, … I’m a twin.” And I was crying. She was like, “Calm down, calm down.”‘

The stunned mom then began combing public records for her town, and discovered three men born on the exact same day as her – November 18, 1969. She was able to rule out two – but then contacted former school classmate Michael Jackman, who was the third.

Karen explained: ‘I said “Do you by any chance know your biological parents’ name, and he said all “I know is they told me Cunningham.”

Karen and Michael took a DNA test through Ancestry.com, which confirmed her theory.

They went to the same middle school and high school, and even played in the school band – Michael on drums, Karen on clarinet.

Karen said: ‘I friend him on Facebook a few months before this. We were just friends from school. That was it.’

Sharing his own surprise at discovering he had a twin sibling, Michael told WXIN: ‘I was overwhelmed. I’ve accepted that she’s my sister but it’s not registering yet.’

Karen and Michael now see each other every day – and have also learned of three half-siblings.

Karen is particularly thrilled to discover her brother, and said: ‘I feel like something was missing, and now she’s here. My life is complete.’

For more stories like this, check our news page

Turtle flies through windshield and hits elderly woman in the head

College student, 21, left with horrific facial burns after being doused in acid