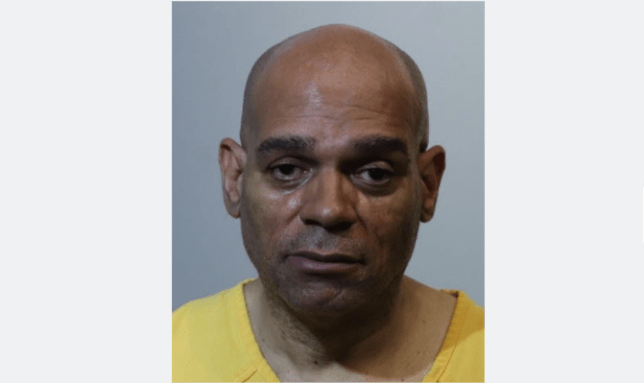 Gary Dwain St Aubyn Campbell, 59, admitted that he lashed out at his family members because of ‘pent up rage’ over how his parents raised him (Picture: Seminole County Sheriff’s Office)

A man who allegedly had ‘pent up rage’ over how he was raised used a samurai sword to attack his mother, father and sister. Gary Dwain St Aubyn Campbell, 59, confessed that the reason he lashed out at his family members when he was arrested.

The crime unfolded on Wednesday when a man called 911 for medical help at a home in Sanford, Florida, saying only that when first responders ‘get here they will find out’ what happened, according to an arrest affidavit obtained by Law & Crime.

Police officers arrived to find Campbell pacing near the front of the home, and three people suffering from serious sword wounds.

Campbell allegedly admitted that he used a katana in his bedroom and attacked his father who was in the living room, causing him major wounds on his face as well as blood loss, according to police. Upon hearing the commotion, Campbell’s sister apparently tried to stop him but he went on to attack their mother in her bedroom, cutting up her face and body.

When Campbell’s sister tried to intervene again, he allegedly used the sword on her, attacking her in the arms. Campbell said he was only attempting to ‘get her out of the way’ and hurting her was ‘unintentional’, the affidavit states.

Campbell allegedly said he attacked his family members due to ‘pent up rage’ over how he was raised by his parents. He claimed that his parents physically abused him when he was a child and that he endued ‘constant questioning and nagging as an adult,’ the affidavit states. Furthermore, Campbell said he had thought for ‘an extended period of time’ about killing his father and ‘snapped’.

The father and mother were in critical condition and intubated, police said. Campbell, as well as his sister, called 911.

Campbell has been charged with two counts of attempted first-degree premeditated murder and one count of aggravated battery with a deadly weapon.

Bill Gates told friends his marriage to Melinda was ‘loveless’

Derek Chauvin can get longer sentence for ‘cruelty’ to George Floyd