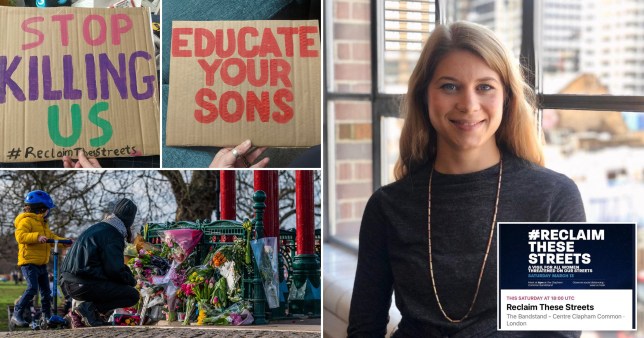 A vigil was planned for tonight in Clapham, south London (Picture: PA/REX)

A vigil in south London for Sarah Everard has been cancelled after talks with the Metropolitan Police failed.

Reclaim These Streets said they had ‘repeatedly’ worked to engage with officers to ensure the vigil could go ahead safely – but officers from Scotland Yard ‘would not engage with our suggestions to help ensure that a legal, Covid-secure vigil could take place’.

They said: ‘We have been very disappointed that given the many opportunities to engage with organisers constructively, the Metropolitan Police have been unwilling to commit to anything.

‘While we have had positive discussions with the Lambeth officers present, those from Scotland Yard would not engage with our suggestions to help ensure that a legal, Covid-secure vigil could take place.’

The group added: ‘In light of the lack of constructive engagement from the Metropolitan Police, we do not feel that we can in good faith allow tonight’s event to go ahead.’

Organisers have appealed to people not to travel to Clapham Common for the demonstration and said details of a ‘virtual gathering’ would instead be announced later today.

It comes after a High Court judge refused to intervene on behalf of the group in a legal challenge over the right to gather for a protest amid Covid restrictions.

Many people had vowed to attend the London event, despite police warning they should ‘stay at home or find a lawful and safer way to express your views’. 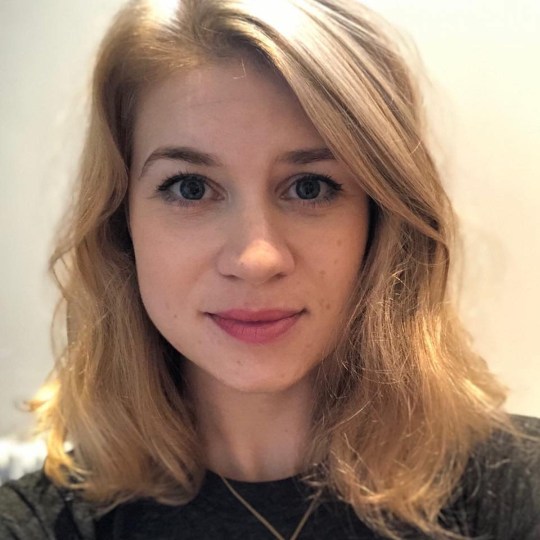 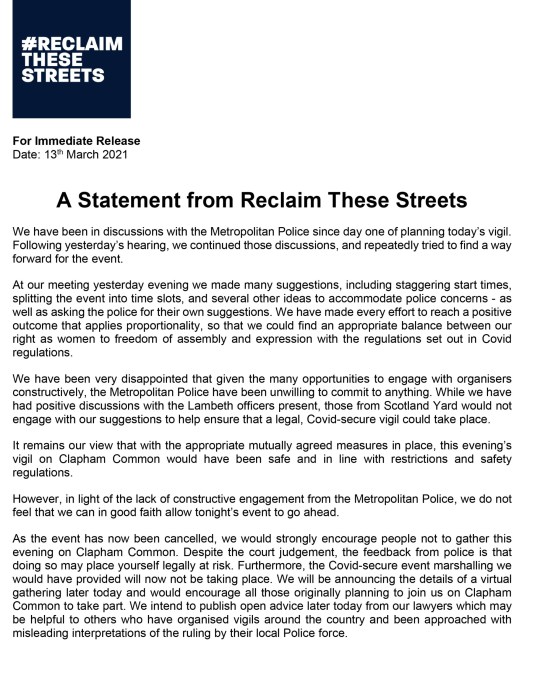 The statement from ‘disappointed’ organisers (Picture: Reclaim These Streets) 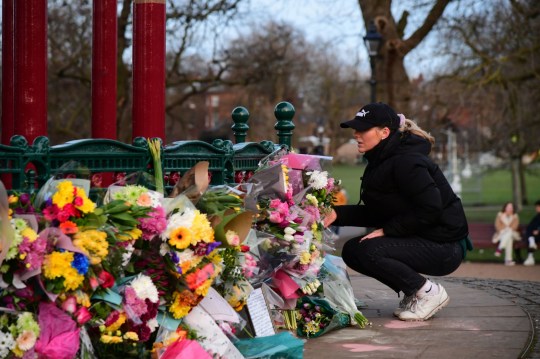 A woman leaves flowers at the bandstand on Clapham Common (Picture: PA)

Reclaim These Streets previously accused police of ‘silencing thousands of women like us who want to honour Sarah’s memory and stand up for our right to feel safe on our street’.

An Edinburgh vigil will also be held online only after Scottish Health Secretary Jeane Freeman suggested women should find another way to pay tribute.

Human remains found in a woodland in Kent on Wednesday were identified as those of Ms Everard on Friday.

On the night of her disappearance, the ‘beautiful and incredibly kind’ marketing executive is thought to have walked from her friend’s house in Clapham through Clapham Common towards her home in Brixton – a journey which should have taken around 50 minutes.

She was seen on footage from a doorbell camera walking along the A205 Poynders Road towards Tulse Hill, south of Brixton, at around 9.30pm.

Serving Met Police officer Wayne Couzens was charged with the murder and kidnap of Ms Everard last night. He is due to appear at Westminster Magistrates’ Court today.

Shortly after the charges were confirmed, police said that Couzens had been taken back to hospital on Friday with a fresh head injury, less than 48 hours after he was found unconscious in his cell.