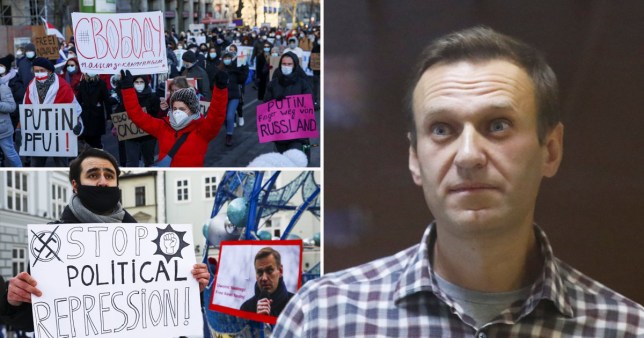 Alexei Navalny will have to serve two-and-a-half years in a penal colony (Picture: AP/Reuters/PA)

Vladimir Putin’s most vocal critic, Alexei Navalny, is set to serve more than two-and-a-half years in a prison camp after losing an appeal against his jail term.

Mr Navalny was arrested last month after flying home from Germany, where he had spent five months being treated for a near-fatal nerve agent poisoning.

He had been on parole from a 2014 conviction for embezzlement that required him to report regularly to Russian police and was accused of breaking its terms.

Mr Navalny argued the charges were ‘absurd’ as he was unable to attend a police station while recovering from the nerve agent attack, which he blames on the Kremlin.

He told a judge: ‘The whole world knew where I was. Once I’d recovered, I bought a plane ticket and came home.’

He has also consistently said the embezzlement charges against him were fabricated, and the European Court of Human Rights ruled his conviction unlawful.

Russian authorities deny any responsibility for his poisoning.

The anti-corruption campaigner had appealed to Moscow City Court to overturn his sentence. 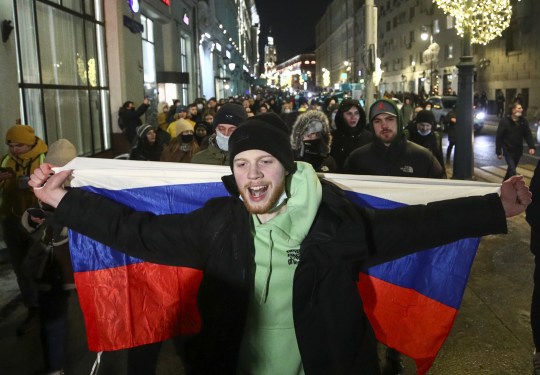 Mr Navalny is the only figure in Russia who has repeatedly drawn out large crowds of protesters (Picture: TASS)

He used his court appearance to appeal to Russians who are unhappy under President Putin, declaring: ‘I want Russia to be free but that’s not enough in itself. We have everything but we are somehow still an unhappy country.

As well as references to his Christian faith and Harry Potter, he also quoted a character from the cartoon comedy Rick and Morty, Rick Sanchez, saying: ‘To live is to risk it all. Otherwise you’re just an inert chunk of randomly assembled molecules drifting wherever the universe blows you.’

As part of the ruling, the judge cut Mr Navalny’s prison sentence by 45 days from his original term of two years and eight months.

In response, the 44-year-old joked: ‘That’s much better!’

He faces another court appearance on Saturday, for a separate charge of slandering a World War Two veteran who praised Mr Putin.

For all the latest news and updates on Coronavirus, click here.

House explosion killed counsellor as she FaceTimed her partner