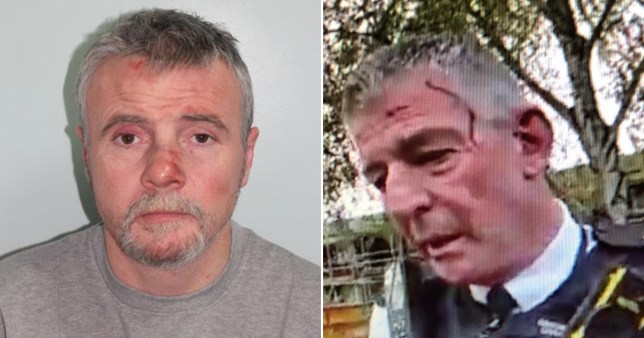 A man who smashed a police officer over the head with a metal pole while high on drugs has been jailed.

Darren Parker, 43, was ‘out of control’ and shrugged off two Tasers before launching the frenzied attack in Kingston, southwest London, on October 31 last year.

Police on their way to Haylett Gardens amid reports of a domestic disturbance spotted a woman standing in the street visibly distressed and nursing injuries to her face and neck.

She told them she had been held overnight against her will by Parker, who subjected her to ‘extreme levels of violence over a sustained period’ before she managed to escape.

When they attended Parker’s home, officers found him in a highly agitated state brandishing the pole and quickly becoming more hostile.

They went in and tried to restrain him when he started striking himself over the head with it. He then hit PC Andy Cougar during the struggle.

Parker also verbally abused the officers and tried to bite them. 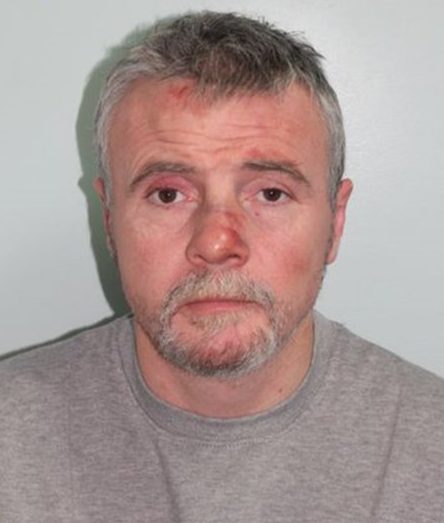 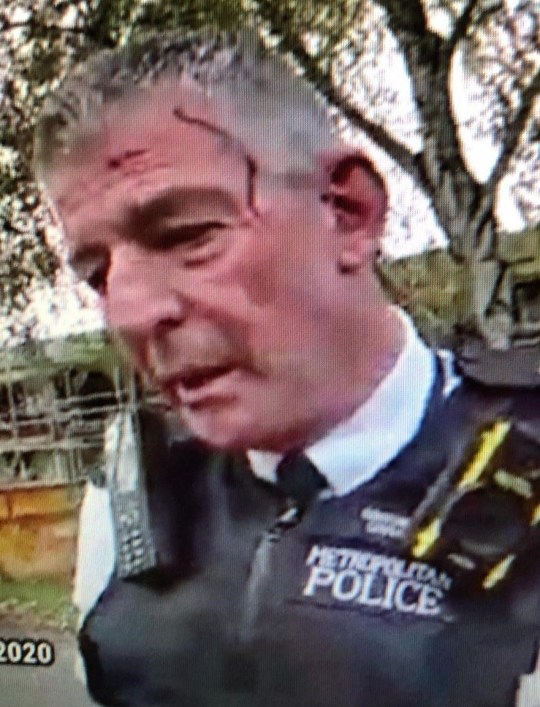 After going to the hospital PC Cougar went back out to finish his shift (Picture: Metropolitan Police)

PC Cougar and the female victim were both taken to hospital for treatment and discharged later that same day.

The brave officer then went back out and finished his shift.

He said: ‘I’ll leave it to the public to imagine how terrifying it is to have to arrest a man like Parker who had a long history of violence.

‘He was armed with a metal pole, high on class A drugs and two Taser activations had no effect on him.

‘While arresting him, he continued to fight for several minutes, leaving me physically exhausted. I took punches to my face and head from Parker who was out of control.

‘It was one of those incidents you never forget.’

Parker pleaded guilty to three counts of ABH against the woman as well as one count of assaulting an emergency worker.

He was given a four-year sentence for the ABH offences and a consecutive four-month term for the other assault at Kingston Crown Court.

The court heard Parker had subjected the woman to multiple violent attacks since 2019.

She continues to be supported by specially trained officers and a restraining order bars Parker from contacting her.

Investigating officer PC James Driver said: ‘Darren Parker showed extreme levels of violence over a sustained period of time leaving the victim with physical injuries and lasting mental trauma. He had no other option but to plead guilty for all matters as the evidence against him was insurmountable.

‘Thanks to the victim and members of the public who came forward and provided evidence in the investigation.

‘I hope that the sentence handed down brings the victim a measure of closure and that she is able to recover from the ordeal she suffered at the hands of Parker.’

Stroke patient, 75, ‘died after being sexually assaulted in hospital bed’ as worker is arrested on suspicion of murder

Girl, 17, died from sepsis on New York school trip after ‘teachers wanted to see sights rather than get help’