COVID deaths in the UK have dropped by 26 per cent in a week as a further 242 fatalities were recorded today. 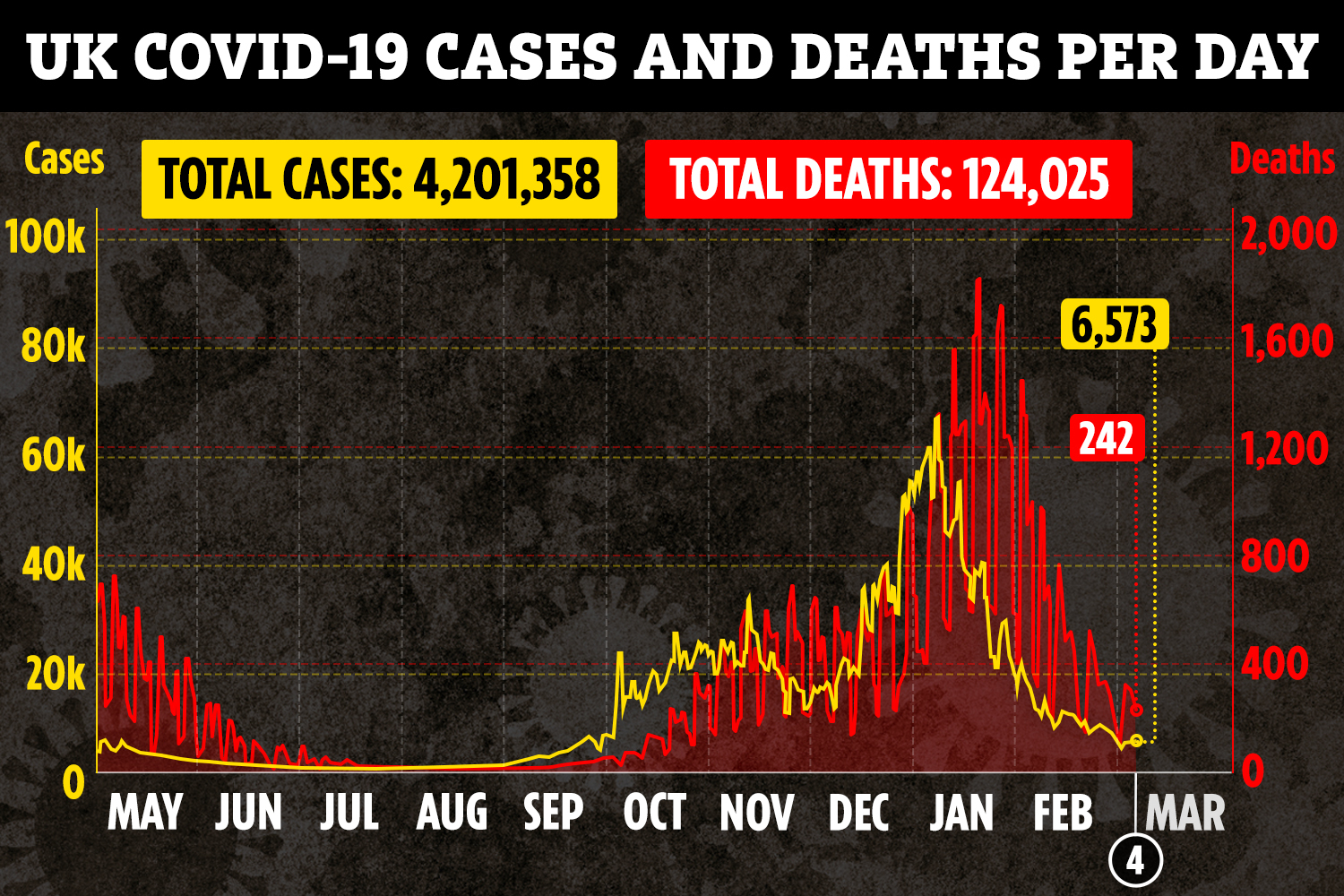 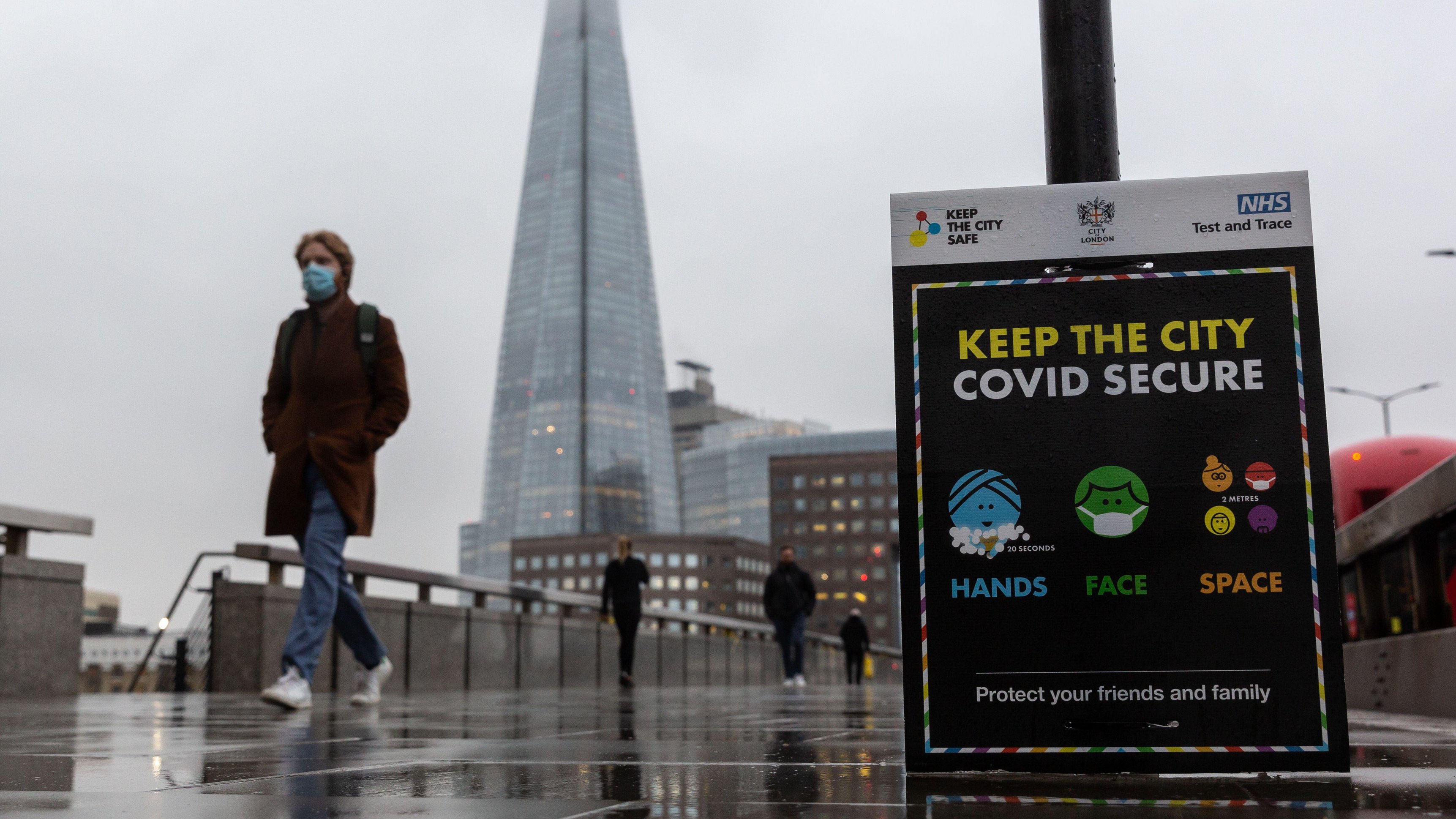 But along with the declining rate of daily deaths, the number of infections has dropped by 34 per cent in one week.

Yesterday, 6,385 infections were recorded in 24 hours, along with a further 315 deaths.

This was equivalent to a 36 per cent decrease in Covid cases in seven days – showing that infections are slowly declining across Britain.

And today’s figures are also lower than this time last week, when there were 323 further deaths and 9,985 positive cases of Covid reported.

On March 3, 275,003 additional Covid vaccine doses were dished out in England as part of our nation’s world-class inoculation programme.

This brings the total number of people vaccinated for Covid in Britain to nearly 21 million.

NHS England confirmed that 184 people who tested positive for coronavirus died in hospital today, bringing the total number of confirmed deaths reported in hospitals to 83,917.

Patients were aged between 19 and 98. All except six, aged between 47 and 85, had known underlying health conditions.

The Covid statistics today follow the good news that the number of coronavirus hospital inpatients in England has finally dropped to levels seen in May.

Official data shows there are now less than 10,000 people in hospitals across the country with the disease.

On March 3, 9,594 patients were recorded as the second wave continues to tail off.

It’s the lowest since November 1, just before the second national lockdown, when inpatients stood at 9,623.

Today, Downing Street urged people to continue to respect the lockdown after an Office for National Statistics survey suggested more than four in 10 over-80s who received their vaccine appear to have since broken the rules.

People in England can only meet one other person outside their household or bubble for exercise outside in this lockdown.

But having one jab has given more OAPs the peace of mind to leave home more, with 54 per cent saying they’d gone shopping.

The Prime Minister’s official spokesman said: “It’s important that people continue to follow the guidelines that are in place.”

Asked if the elderly were behaving irresponsibly, the spokesman said: “We are asking everybody to continue to follow the rules and guidelines.”

This morning, Rishi Sunak sparked fears that Britain’s roadmap out of lockdown could be delayed after he extended the furlough scheme until September.

The Chancellor said the wage subsidy scheme is being kept in place for another six months because “things might change” in terms of easing lockdown.

The PM has insisted every stage of the four-phase roadmap will only be activated if the pandemic numbers allow.

He has left five weeks between each new stage of unlocking to allow scientists to measure the effect opening things up.

To do so they will look at statistics including the progress of the vaccination drive, the spread of the virus, hospitalisations, and deaths.

Meanwhile, the NHS has slammed “reprehensible” queue jumpers who are claiming to be carers in order to get their Covid vaccine early.

Officials aren’t thoroughly checking the credentials of people when they turn up for their appointments, Brits who have had the jab claim.

NHS bosses say carers and NHS staff must provide proof of their occupation when they go to get vaccinated, such as letter identifying them as a registered carer.

But dozens of Brits who claim to have been jabbed have said there were “no checks” and no need to provide any proof of identity.

One person wrote on Twitter: “Had the Covid vaccine. It was straightforward and painless.

“If you are a carer, get yourself an appointment. You don’t even have to be a carer — no checks.”