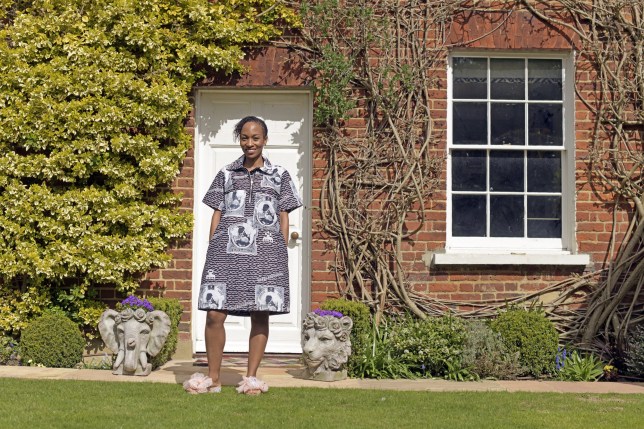 Kemi Lawson has had a super-busy 12 months.

Not only did she move house the week before the first Covid lockdown, she also gave the place a complete makeover – while home schooling her two young daughters and juggling her City career.

Many might have buckled under the strain, but not interiors-lover Kemi.

In fact, the renovation inspired the 43-year-old finance high-flyer to launch her own online homewares and lifestyle business. The Cornrow.

Kemi fell in love with a quirky, Grade II-listed 1750s cottage in the leafy suburbs of north London as its historic credentials lend themselves perfectly to her heritage and taste in nostalgic décor.

‘I wanted to recreate that in a fun and inspiring home where my daughters can celebrate their heritage and culture in the most joyful way possible.’ 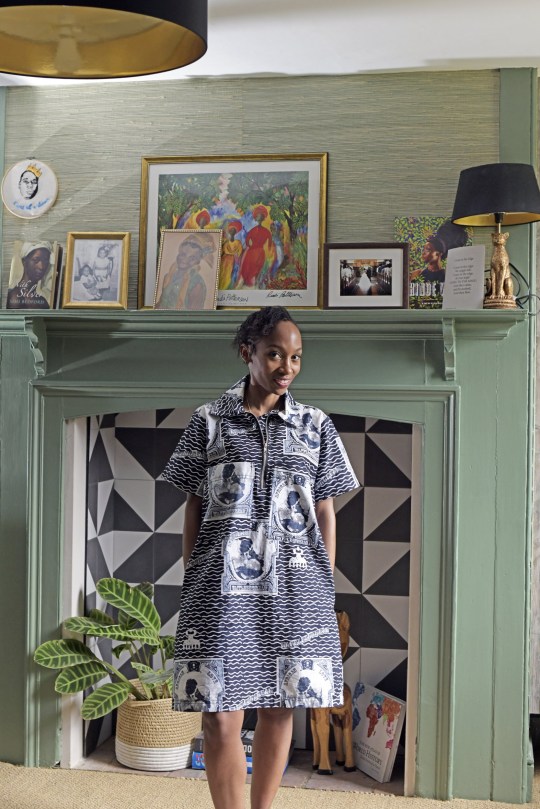 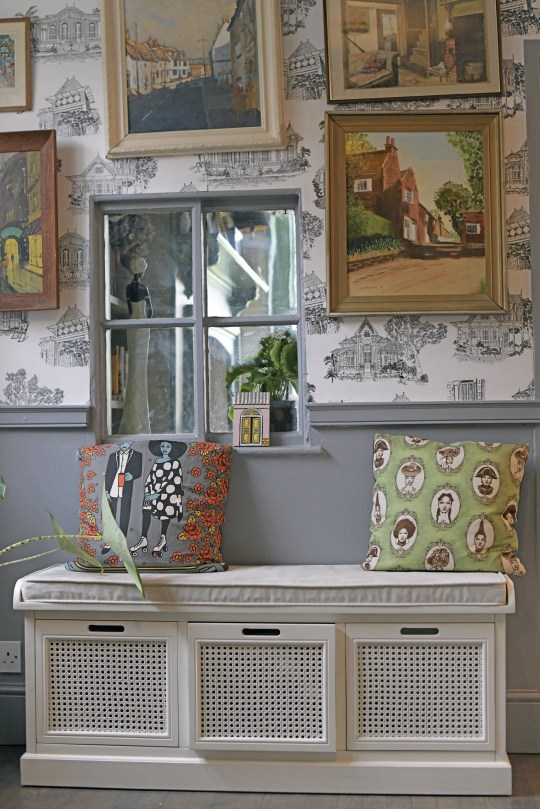 The African influence is reflected in Kemi’s love of colour, textures, geometric shapes and her art and sculptures.

The stately home feel comes via her boarding school days and is showcased by the original beams, wooden panelling, painted fireplaces, swags, pelmets and canopies – especially in one daughter’s bedroom, where Kemi has created a modern take on the four-poster bed.

‘The Jamaican nan-chic is evident in all my pictures and artefacts that pop up everywhere around the house. It is a definite “more is more” vibe,’ she smiles. 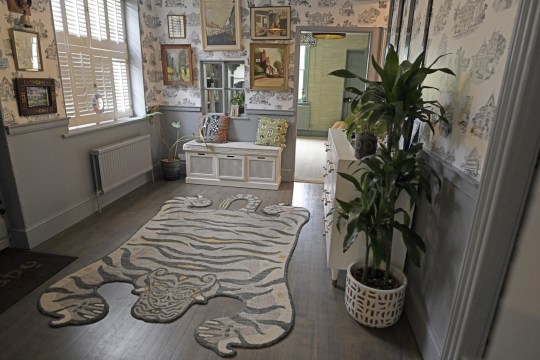 It was while shopping online for homewares during lockdown that Kemi saw a glaring gap in the interiors market.

‘I found I was always going down internet holes to find black-inspired African designers,’ she says. ‘I wanted some Russian dolls and while there were lots of varieties available, including farmyard animals, I could not find black dolls anywhere.

‘I eventually sourced some but they had been made in Russia and imported to New York, which made them very expensive.

‘I realised there was a big gap in the market. So I decided to give up my job and set up an online home and lifestyle store called The Cornrow.

‘The idea was to source and sell beautiful but affordable goods and homewares tailored to the modern black aesthetic, for everyone to enjoy.’

The Cornrow is already getting serious recognition in some of the UK’s most revered interiors magazines and forums.

And looking around Kemi’s home, it’s clear why her clever combinations of colour, texture and playfulness are catching on as a new décor trend. 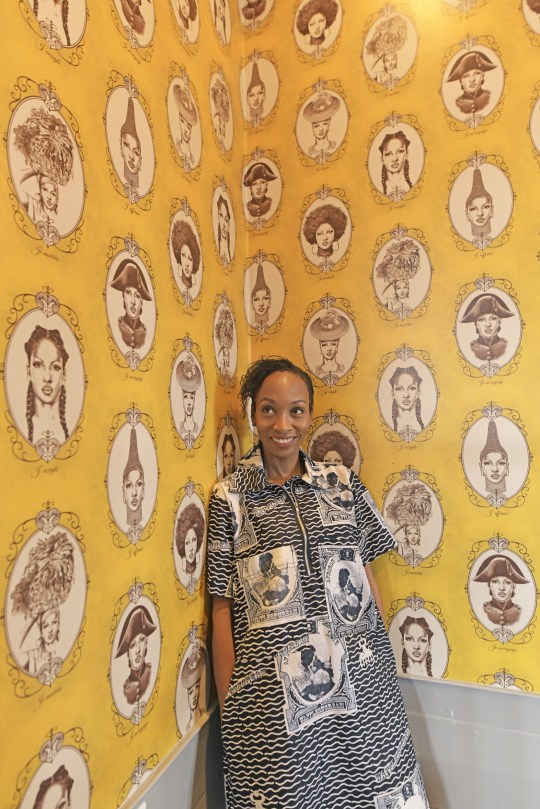 The stairway is wrapped in a fabulous mustard Yaël et Valérie wallpaper featuring cameos of famous black women through the ages.

‘It’s the first thing my girls see when they come out of their bedrooms in the morning,’ says Kemi.

‘It’s very inspiring. I want my daughters to be surrounded by images
of positive and powerful black women.’

The wallpaper is perfectly teamed with stately grey wooden panelling and works beautifully against the backdrop of the cottage’s original low wooden beams.

Another wallpaper bears illustrations of charming 1900s gingerbread houses in Haiti and there’s a mat at the front door that reads ‘Ekaabo’, which means welcome in Nigerian. 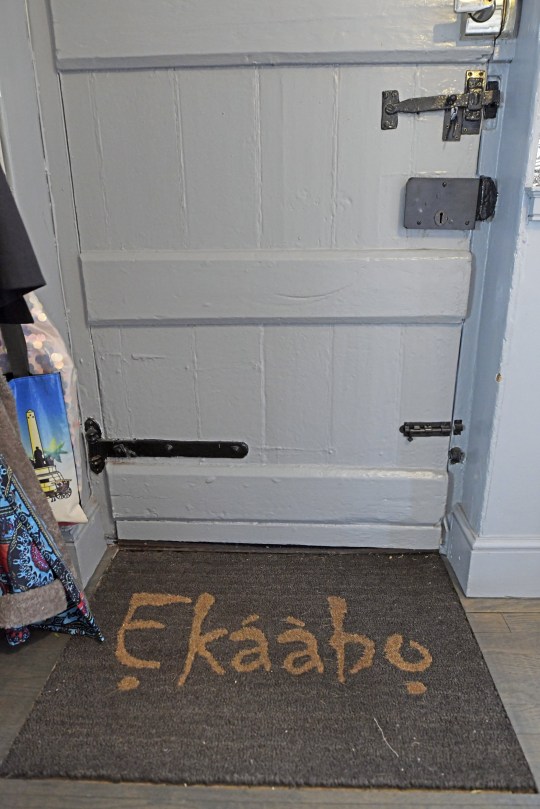 ‘It’s for when we do get visitors again after lockdown,’ says Kemi.

On the shelves in her daughters’ playroom is a collection of Barbie dolls, including one of civil rights activist Rosa Parks and another of fashion icon Iris Apfel. 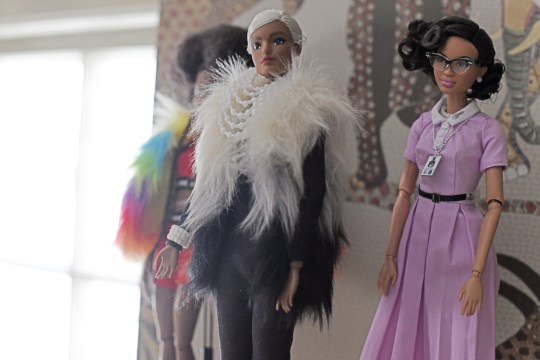 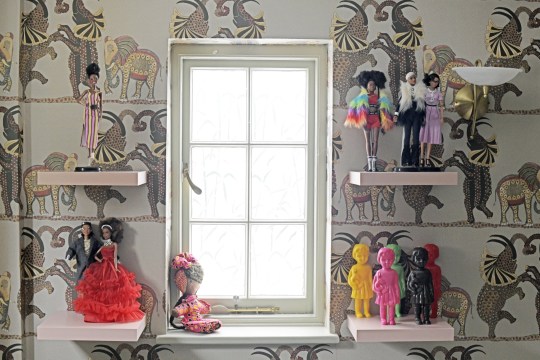 ‘My specialist subject on Mastermind would be black Barbies from the period 1984 to 2020 – I rotate them as I can’t have them all on display as that would be a bit Miss Havisham,’ Kemi laughs.

There’s a bright home office created in a nook from where Kemi runs the business, with built-in cupboards and open shelves that accommodate her many books and artefacts.

‘I always use lots of books – wherever there’s a surface there’s a book. I see them as a great styling tool and a way to introduce another pop of colour.’ 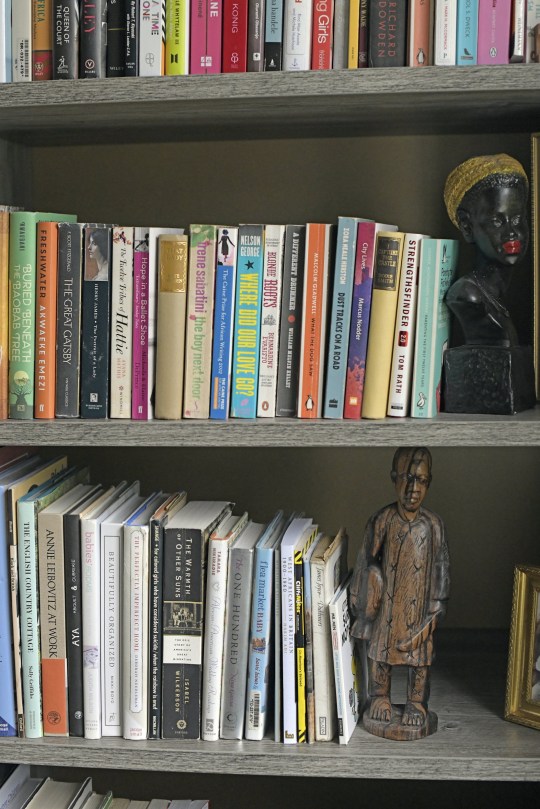 The Cornrow imports African fabrics and has them made into beanbags, throws
and cushions.

‘Lots of people enjoy this aesthetic,’ adds Kemi. ‘Our customer base is very diverse and looking for beautiful, fun, unusual items in their homes.’

The Ghanaian Asafo flag on the wall is a popular item in the shop.

‘I love the way the Union Flag is portrayed in the flag, making it a wonderful mash-up of British and west African influence.’

But Kemi’s ‘ancestor wall’ is the soul of the house. ‘I have collected images of my family for many years and until now they’ve been packed away in albums. 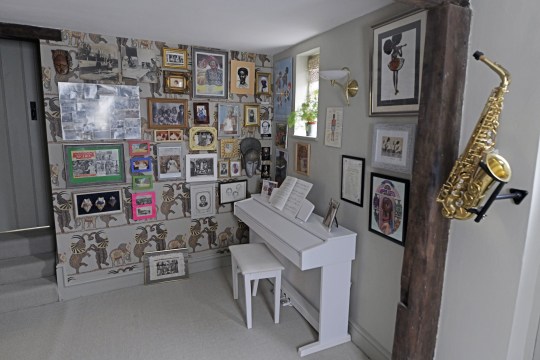 ‘Finally putting them on the wall means they now have a home in my home. It’s a way of keeping my ancestors and their stories alive, celebrating their achievements and recognising their struggles. The girls love it.’

The cottage came with a book tracing its story, filled with historical facts, census records and old photos.

‘It seems this isn’t the first pandemic this place has lived through as it survived the Spanish flu,’ says Kemi.

‘I love that my family’s history is now part of the house’s history, signalling the diversity of the area and the country. And that we are continuing the story, to pass on to the next custodians.’

Do you have a story to share? We want to hear from you.

Get in touch: [email protected].

House Hunter: The prettiest Tudor homes up for sale around the UK

House that sits in the woods but has sea views too on sale for £1.5million

Beware the SVR: The cost of doing nothing when your fixed mortgage rate ends

Ground rents to be banned in new-build leasehold homes