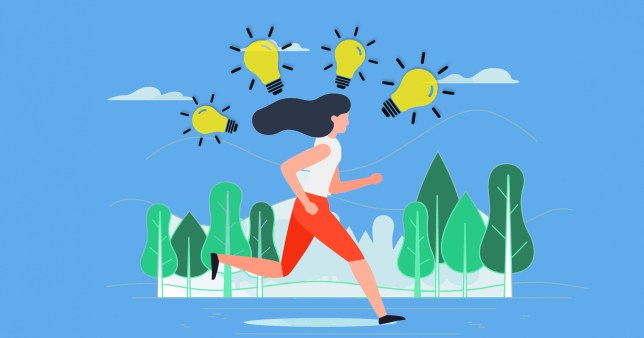 Do you have great ideas when you go running? (Picture: Getty)

We all know that running – even a short jog – can make you feel good.

It’s great for the body, for your overall fitness levels, and it can also help to relieve stress.

But a new study has found that running could also help to make you more creative and could actually help you think up brilliant new ideas. Which is great news if you have been struggling for inspiration in lockdown.

Researchers are calling it the ‘Runfulness’ effect   - a play on running and mindfulness. It basically describes a state where stress and focus simultaneously decrease – creating space for new ideas.

The European-wide study, conducted by the team at Brooks Running, revealed the incredible effect running can have on your creativity levels. They found that 9/10 runners think about new things while on a run with 80% experiencing transformative new ideas.

This combination causes people to enter a state of disconnection from the world and worries: The Runfulness effect.

This leads to increased creativity, with 9 out of 10 runners indicating that they think about things they usually wouldn’t and 80% of people saying that they have experienced transformative new ideas during a run.

The study was conducted by renowned consumer neuroscientist Professor Olivier Oullier, to determine what effect running has on the mental state of people who run on a regular basis.

The study also revealed how to achieve this state of Runfulness – including running in silence, running alone and wearing comfortable running shoes in order to create an environment free of distractions:

Or with music that does not hijack your attention.

Listening to people talk or to songs you don’t know will trigger curiosity, making people unable to disconnect .

All but one study participant mentioned they cannot reach a special state while running with others.

This does not mean that people should always run alone, but it will likely prevent people from reaching a Runfulness state.

All the participants who mentioned reaching a different state of mind/wellness when they run said it was never intentional.

It is important that the running gear is comfortable to prevent distractions - 80% of the participants reported that what they wear contributes a lot to a feeling of wellbeing. Shoes with cushioning can help avoid distractions.

When you want to achieve a state of Runfulness it is important that you don’t have to worry about being home at a specific time.

Professor Olivier Oullier explains: ‘Running is great for the brain and Brooks understands that mental wellness is key to lead a successful life.

‘By introducing the concept of Runfulness, we’re showing what the brains of runners experience, while offering unprecedented insights into their brains and what makes them feel better.”’

To reward transformative ideas inspired by Runfulness and help them become a reality, Brooks created the Run Fund, where ideas can be submitted for different categories. A professional jury will then pick five winners globally to receive a donation of $100,000 (£71,725) to bring the idea to life, with an additional four runners-up prizes of $25,000 (£17,931).

‘We always knew that running is much more than just building up your physique and it’s clear running can take you to a state of wellbeing that unlocks something inside you: new ideas, new ways of thinking, new opportunities,’ says Matthew Dodge, managing director of Brooks Running EMEA.

‘To reward this, we set up the Run Fund. Because we believe that people can find the power to change a day, a life, and even the world while they run.’

Do you have a story to share? We want to hear from you.

Get in touch: [email protected].